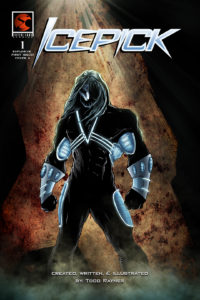 Todd Rayner’s first issue of Icepick is something that while not exactly original with its intentions, is something that does have my attention. We pretty much have little in the way of answers aside from a small tidbit here and there through out the first issue. And whether or not this is the first time Todd’s done a comic, its clear to me his art style could use some improvement. But despite my view of that, his artwork is pretty decent and I dig Icepick’s look since it kinda has a Mushroom Head feel to it. Along with placing commas in areas where they are meant to be at or not at. Though I kinda feel this bit of dialogue doesn’t necessarily make sense ‘Sure, but I know you saw what the Hell I just saw!?’

Of course that just might be me who feels that way about that line of dialogue. And if Icepick is someone Annabelle is/was pretty close too prior to his suiting up, why exactly is she being kept in the dark about him if his best friend/brother apparently knows what he’s doing? This, along with some shady happenings are things I’m rather curious about. Along with what led to Icepick suiting up and a mysterious accident related to him. Luke, the best friend to our main man the Icepick, clearly is aware of what our main man is doing. But the question is, how aware is he of what he’s doing? The fact the thugs of a bad guy who sent a problem solver after Luke and Annabelle are clearly freaked out by another problem solver is pretty amusing. Not that I can blame them cause of how he looks as those guys are a little on the creepy side! 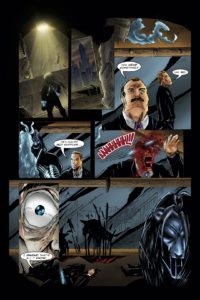 Despite the un-original theme and the art that for some probably wouldn’t be appealing at first glance in a preview, I still think this is worth giving a shot too as it has potential to be a damn good book if Todd is willing (and I’d like to think he is willing) to put in the work. And if Icepick’s troublesome bone picker those thugs were nervous about ends up being his main big bad, well, I’m not gonna complain. As who wouldn’t want to see a guy like that getting his ass kicked from time to time!?

Summary: Icepick is a story filled with life, death, revenge, and all things super-hero. The story revolves around Icepick who is looking for answers about his parents death and as the story unfolds we learn about Icepick’s past, his parents, and the mysteries around his best friend and fiancée. Throw in the mob, the police, the super natural hero stuff and you have a intriguing adventure where one man uncovers things he never could imagine.