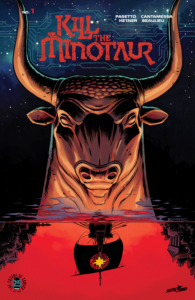 Kill The Minotaur begins in Crete around 1500 B.C. Here we encounter King Minos, and though we don’t see him, we learn of his son, the titular Minotaur. Fast forward to Athens, eight years later. King Minos has defeated Athens and yearly extracts a select group of Athenians to take back to Crete for reasons unknown. Prince Theseus of Athens is, understandably, angry and tired of this “tribute,” but is restrained by fear of what King Minos would do to Athens and her people, his people, if he were to rebel. But this tribute is different. Daedalus, Minos’s right-hand man, warns Theseus that Minos’ “madness must be stopped” before it devours the world. And bada-bing. The hook is set. The two team up and we next see Theseus and his best friend Pirthous aboard a Cretan ship bound for Crete. Then KTM up and goes all George R.R. Martin all over our faces.

Pasetto and Cantamessa have managed to deliver all the elements needed for a truly enjoyable comic book reading experience. The pacing is near-perfect. An inordinate amount of story and action is crammed in this first issue and done so in a seamless manner. The characters are nuanced and three-dimensional. I mean, is Theseus a bit of a stereotype with his long blond locks and his half-cocked yet noble princely demeanor? Sure. But Pasetto and Cantamessa manage to take these platitudes of “The Hero” and and craft a truly likeable protagonist in Theseus, one who, it’s revealed, is more multi-faceted than you might think upon first meeting him. Actually, all the characters in KTM pop with distinctness despite all being the usual placeholders for otherwise filler roles that always seem to populate fantasy-type stories. And to top off the tank of accolades: KTM also treats us to fantastic world-building, plenty o’ intrigue and multiple plot twists. All in the first issue, mind you!

Another gold strike for the KTM creative team is Lukas Ketner’s art. Combined with the vibrant punch of colors provided by Jean-Francois Beaulieu we get beautiful artwork that feels alive with an almost Jack Kirby-esque panache. Characters are distinct. The scenes are filled with movement. Emotions, such as Theseus’ immense anger in an early scene during the Cretan tribute, for one example, are so well visually articulated that one could just as easily follow the story without words. Is it a style you’ve seen before? Yeah, but it’s still beautiful to look upon and it works fantastically.

New creators pitching new books should look to titles such as KTM for kickass examples of what it means to fire on all cylinders. It’s set a high bar, not only for other comics, but for itself. You can hook them with the first issue but it’s the second and third that keep the reader reading and I hope it doesn’t falter. My only concern is where KTM will go in the long run. It feels very mini-series-ish though I didn’t see any indication that it was. Even still, if Pasetto and Cantamessa can keep up the top-notch story telling KTM will remain a fixture in my very selective list of pulls.

Summary: Athens lost the war to Crete. Now, they pay tribute to King Minos by sacrificing their best citizens to his unearthly labyrinth. Conspirators believe Theseus can be the hero they need to end the mad king’s bloody reign…but no one on this world has ever encountered anything like the savage minotaur. 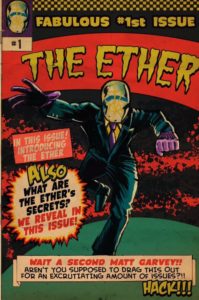 The Ether #1
Garveyverse 2017
Written by: Matt Garvey
Illustrated by: Dizevez

Summary: A Child killer on the loose and London’s Vigilante is on the case.

This is one of the benefits of having a website where you primarily do reviews because otherwise I wouldn’t have known about this little gem. Matt is from England and should you be interested, which I hope you will be, he’ll ship worldwide. This is also what I like to think of as that great example why you go to cons and hit up Artist Alley and meet, talk to and check out those people you don’t know who have comics on their table. You never know until you look but you could end up with a new favourite writer or artist.

Right off the bat this book opens up with a pretty good look at The Ether and his relationship with the police. It’s both cooperative as well antagonistic it’s one of those relationships where it may not made in heaven but both sides realise the importance of it so they huff and puff, see full of bluster, but in the end it boils down to understanding. Kind of reminds me of early Batman and his relationship with the GCPD and to be honest it’s kind of nice and refreshing. There’s tension there sure but there’s also that begrudged respect too.

When discovering someone new you go in with low expectations, it’s only natural having never experienced their work before. That being said after reading this issue I now have the highest of expectations from anything Matt and Dizevez do from here on out. The way the story is structured, the ebb and flow, the revelations and those key moment, see hooks, that grab then keep your attention are extremely well done. The characterisation here is phenomenal to see and you really get a sense for these people and like many of them. Yes even the scummy ones because every masked vigilante needs informants as well those they repeatedly let know they are watching them so keep it legal.

I’m a huge fan of Dizevez from her work here as well. I love the way this painted look comes across. Just when you think the whole thing is hand painted and then has digil work to enhance you realise the whole thing is more computer painted art and that makes it even more impressive. I wasn’t aware that they could work like this nowadays. The way she gets Ether’s mask to look like a map of the city is amazingly well done. Page layouts are utilised nicely through angles and perspective. The more backgrounds we see the better the overall effect, and the rain too was nicely done, so that we get a nice overall look, tone and feel at what’s going on throughout.

While we don’t get The Ether’s origin per se we do get a very good reason as to why he takes the actions he does. So that part of the backstory continues the damaged hero trope but instead of feeling like we’ve seen it before it comes across feeling right, natural. I like that there are no superpowers here just the mask and a suit and some sweet moves that take his opponents by surprise. So it really just relies upon the physical and mental faculties of The Ether to make it as effective as it is. 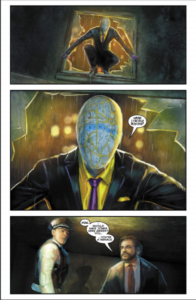 This is my first exposure to Matt and Dizevez (who does her first interior work here) and I’ll wholeheartedly admit that I’m looking forward to long healthy careers from them. This is the kind of stuff you wish Batman still was, strong, powerful, angry and full of that street level crime fighting.

You can find the book here http://mattgarvey.bigcartel.com/ along with the rest of the books Matt has to offer. My suggestion is to get em, enjoy and help promote comics that realise the potential of what we want them to be. 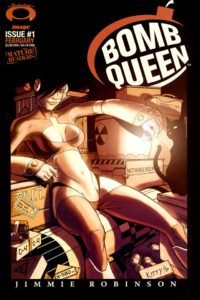 Summary: In the twisted town of New Port City, the only thing the population of criminals and murderers need is the cruel icon of injustice and amoral behavior: Bomb Queen! But political outsider, Robert Woods, believes the citizens need peace and equality, so he does the unthinkable – brings a Hero to town. Will the war over New Port City bring democracy, or violent destruction?

Review: Bomb Queen is a really, really fun and witty book with an incredible commentary on what could the world realistically look like if a nearly all-powerful villain ran the world? Or, in this case, a single city? Hotly sexual and able to beat almost anyone who comes across her, our truly titular villainess and the true mayor of New Port City, Bomb Queen, runs things with an incredibly loose fist unless someone decides to question her authority.

The world of New Port City is truly a despicable place with designated “crime zones” where literally anything goes unpunished. Murder, rape, pedophilia, you name it. New Port City has got it to some extent. And it seems neither the military or world government feel poised to get in BQ’s way in ruling it. 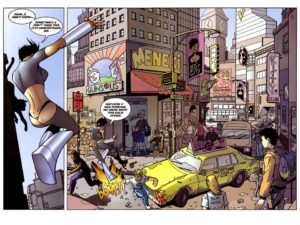 None of this however stops a politician with a good heart from attempting to finally topple the Queen in his attempt to be elected “mayor” of New Port City. Queen knows she has to allow some democracy to remain in the city so while the election feels like something she could put a stop to easily if she wanted, Robinson has a great handle on his own world and really shows you why it’s not so simple for BQ even if she is a dictator.

Robinson really goes to town with his hard R rated world showing how BQ and this world work under a new order that not only allows but entices bad behavior. No better scene displays this than at one point where the people discuss the new Mayoral candidate and how they don’t want him to take away their designated crime zones.

People are terrible to one another and if they have an opportunity to legally use that want to hurt one another to their advantage they’re going to. And if someone tries to take that away from them, then all hell will break loose. People are also contradictions, and when towards the end BQ ends up killing the hero that was working for the Mayoral Candidate to take down BQ, the people revolt. 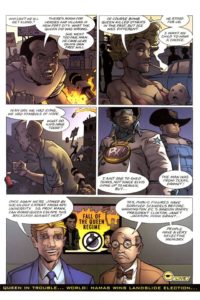 It really is a fascinating look into how we humans simply don’t make sense when given a power beyond our control. While BQ has allowed for ways to keep herself in control, it will only take one hero powerful enough or smart enough to bring the regime tumbling down for good.

Robinson’s twisted sense of humor that he gives voice through these characters is incredible and allows for this book to be a whole lot of fun to read. Sure, terrible things are happening to characters but they’re happening in funny ways so it’s okay, right? See, we’re walking contradictions. Seriously though, Bomb Queen is hilarious and filled to the brim with crude and insensible humor that you’re either going to appreciate if you’re a teenager or just ripe for a smart sex joke.

Robinson’s art is also incredibly good as well. Very styalized and great for action scenes. And what action scenes they are. Just as sexual as they are epic to read. BQ’s design as well is incredibly skimpy in nature but fits her character perfectly. With no inhibitions to keep you back, why dress modestly?

I really, really enjoy look at Robinson’s art. It’s one of my favorite things about this book. All the characters are really fun and the world comes alive under his pen, the colors by Marin really help this as well as the world of Bomb Queen is thematically and literally quite colorful and I love it.

This was a great read. I can’t wait to read more.