“…the sins of priests have consequences in the body of the church…” –El Torres, Roman Ritual 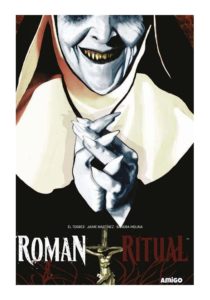 Just what the hell— er, that is, what under Heaven would the Holy Roman Church do if His Holiness the Pope was possessed? With so many movies in the genre of demon possession, doesn’t that sound like a movie you’d at least give a chance? I know I would. But this isn’t a movie (though it should be!), this is Amigo’s Roman Ritual by El Torres, and I just have to say, “Oh. My. Damn.”

Father Brennan is an ousted priest with a history for pissing off Rome, and he happens to be the best exorcist alive. Brennan doesn’t play by the rules. In one scene, while confronting the demon-pope, he lights a cigarette and says, “Fuck the system.” Can’t tell you how many times I’ve thought the same. So, you can see why he’s a thorn in the side of Rome. Now, that’s not an original concept. We’ve seen that so many times in movies that it’s cliché. But Torres uses that cliché to an entertaining advantage. Sure, there’s some familiar ground. Nothing you haven’t seen in movies or comics before. There are obvious echoes of The Exorcist here. But just when you think you know the ride you’re on, that’s when it takes a turn into the unexpected. The above mentioned demon play-thing of a pope, for example. 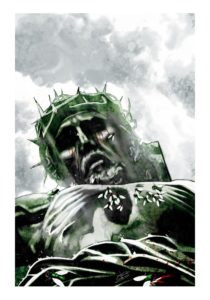 It’s difficult to pull off ambience in a comic book, but Torres and his creative team give us some genuine, and violent, horror. When you deconstruct it, horror is much like humor, in that it works best when you don’t see it coming: the unexpected.

When Brennan faces the demon-pope for the first time he is shaken, and retreats. Suspiciously, his superiors bring Father Gabrielle out of retirement to handle the job. But Brennan warns him that they just don’t have enough info to proceed with exorcism, and somehow a mysterious (very dead) nun, who has been haunting him in his dreams, is involved. But he is haunted by more than just dreams. Naturally, he is scoffed at and, naturally, they fail without him. Quite miserably.

This is a spoil-free review, so you’ll have to read it for yourself. Just keep in mind that in order to cleanse the possessed, Brennan will need to know what, and who, is possessing the pope. The finale is one of the best. It is both heart-breaking and triumphant. And, yes. Unexpected. 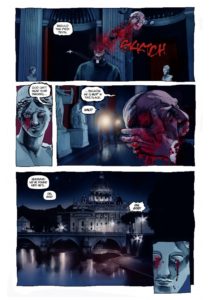 I’d like to mention my admiration for the research Torres put into this. One of my hobbies is religious studies, and maybe that’s why I like this so much. Of course, some of what he uses for the setting and background is public knowledge and readily available, but it makes for a rich, full, lived-in world. Therefore, the threat to that world, is urgent.

And a big thank you to Amigo Comics for sending me a pdf for review devoid of any giant watermarks. That’s much appreciated. Check out Amigo’s catalogue. They’ve got some great titles.

Summary: Self-exiled priest John Brennan, a troubled exorcist, is summoned to Rome to stop an ancient evil spreading within the Holy See itself. A revolutionary story about possessions and exorcisms, with ties to the church’s shady past, and a man, almost helpless and alone before the evil that would bring the end of the catholic church.