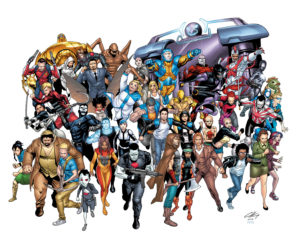 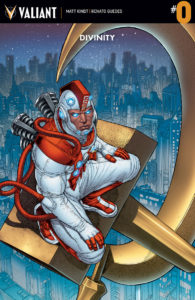 “Almost overnight, DIVINITY has become one of Valiant’s most beloved and most acclaimed characters – an inspired combination of widescreen super-heroics and intense science fiction unlike anything else in comics,” said Valiant Editor-in-Chief Warren Simons. “Now, in the pages of Abram Adams’s first zero issue, Matt Kindt and Renato Guedes have envisioned the perfect way to introduce DIVINITY readers to the full breadth and scope of Valiant’s universe by pulling back to reveal the massive cast of powers at play around Abram and his continued impact on the fabric of our world. This is a guided tour of what makes Valiant tick in 2017, and it could very well be one of the most important jumping-on points we’ve produced to date.”

Divinity, a lost Russian cosmonaut newly arrived to Earth with god-like powers, has successfully restored the world to order after the reality-altering event known as the Stalinverse. But how can a man – even one with near-divine abilities – know for certain that the planet has been truly restored in full? To make sure, Divinity must bear witness to the world as it now stands – heroes, villains, gods, and all – to ensure the rightful order of the Valiant Universe! 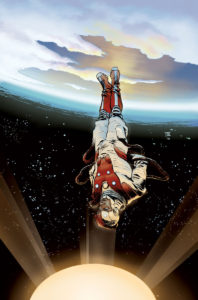 DIVINITY #0 – Cover B by Ibrahim Moustafa

From Bloodshot to Faith to Ninjak to X-O Manowar and dozens of surprise guest stars, traverse the world of Valiant’s most enduring icons as Divinity guides a standalone entry point into the most acclaimed publishing line in comics today!

Plus: This October, Valiant unveils a universe of new worlds, new beings, and new myths in ETERNITY #1 – a VISIONARY NEW SERIES from the minds of New York Times best-selling writer Matt Kindt (NINJAK) and blockbuster artist Trevor Hairsine (DIVINITY III: STALINVERSE)! The next evolution of Valiant’s acclaimed DIVINITY saga starts here with an expedition into the Unknown. Beyond time… Beyond space… Beyond reality itself… ETERNITY awaits! 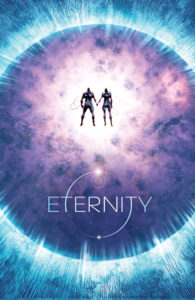 ETERNITY #1 – Cover A by Trevor Hairsine