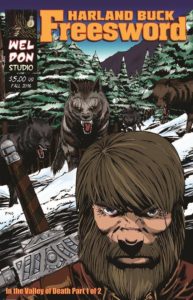 Now you might be thinking to yourself ‘freesword? Like frees word?’ but I’m here to tell you that that is not the case at all. As its actually free sword, just combined into one word, like freelance for example. Why the good man Scott Weldon did it like that? Well, that’s a question you’d have to ask him! The world of Harland Buck is essentially a fantasy world, complete with swords, kings, queens, horses, and all that good fancy stuff! And if there’s one thing that’s certain about this particular world of Scott’s, its that Harland himself is not a hero or an anti-hero. He’s just a scruffy looking fella with a fancy looking sword he doesn’t like to use for whatever reason who’s out to make some coin while doing whatever job he can get his hands on. I like the fact that Harland’s just a guy looking to make some bank for himself without much care. Even if he does have some morals when it comes to helping someone out much to his own dismay! While Harland’s a Freesword and that generally has its own issues, his new found friend being (though the jury might be out on that by the end of this two parter) known as Kendall Obassa the Realmguard. Realmguards typically being more liked then a majority of Freeswords considering they actually full on serve a king.

Trouble begins for our lead man and Kendall when the Realmguard ends up falling down the side of a mountain thanks to his horse getting spooked. And even though Harland doesn’t really want to do it, he leaves the caravan containing the gold ore he, Kendall, and several others are supposed to be protecting in order to help the guy out. Guess that conversation of theirs musta helped make quite the impression on ol’ Harland! Now despite the fact that Kendall is a black man with a family, I am liking the fact that racism doesn’t really seem to be a thing here. As who needs that garbage? Not me, that’s for certain! And you would think Kendall ending up down the side of a mountain with a broken leg would be their only problem, but unfortunately that’s not the case! Or otherwise this would be a fairly short story with some great art from Dino Agor and great colors to go along with it thanks to Fredrick Allison JR.! As there’s snow about (gee, thanks snow!) which makes getting to civlization a bit harder even though Harland’s not exactly obligated to help the man out since he’s not really getting a whole lot out of it. Gotta love a case of pesky morals! 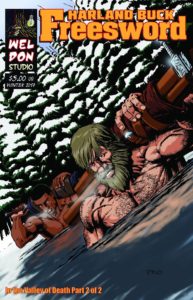 There’s also the matter of a bunch of wolf like critters called the Canix to deal with as well. Who are a smart bunch of cookies and are only really after Kendall cause he’s a weak point. Only of course, our rugged sword mystery wielding man isn’t quite willing to let them have his traveling partner without a fight! And as you read the story in both issues, you really find yourself wondering why ol’ Harland doesn’t just use his special sword and go to town on the pesky Canix fellas. Which is actually one of the earliest things Scott sets up near the beginning of this story where that sword is concerned and has me quite curious about. Hopefully we get to see the reasons behind Harland’s lack of desire in wanting to use it in a future story as I imagine its quite the doozy! Though it is nice to see him use the sword near the end of the story here. But did he just leave it behind though as he and Kendall went on? As that was kinda unclear to me but I can see why he might want too considering it apparently brings him more attention then he likes.

But let me tell you what, I swear this story of Scott’s here is practically an on the edge of your seat once things get going. As you aren’t quite sure what’s likely to happen next. Especially if you’re not sure if Harland will end up deciding to cut his losses and leave Kendall behind on his own. One can easily see why folks are buying this great read up after having read it myself and I for one am damn eager to see what happens next! As I am quite hooked now and its all Scott’s fault! Just kidding! (Or am I?) And a really nice thing about this Indie title? Is the fact its readily available in print format! Which is seriously nice to have in your hands in my view. And for 5 bucks an issue plus shipping and handling? Can’t really beat that price! Unless of course you’re just a cheap skate and would prefer it to be cheaper but whatever. However, there is no digital version of the comic as of yet. But that could change in the future so stay tuned! So if you haven’t yet, get yourself a copy of this awesome little fantasy comic! As otherwise, Harland himself might come after ya!

Summary: Harland Buck is a tough, cynical mercenary swordsman burdened with a conscience he sometimes wishes he didn’t have. Join him as he plies his trade in a world of hard men, tough women, frontier wilderness, myth, magic and adventure.