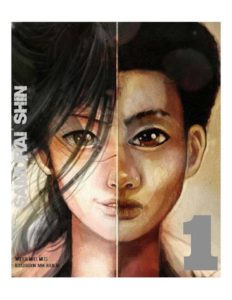 Review: Issue #1 of Samurai Shin isn’t perfect but it’s quite fun for what it is. Obviously inspired by the anime Afro Samurai, the comic features characters that fit within the aesthetic of that series by featuring a black samurai main lead character, a white evil rival antagonist and later on in the issue another bad guy who wears a bear mask on his head.

But it’s only in the aesthetic where such comparisons end as Amir, our protagonist, shows a far wider range of emotion in a single issue than Afro – of Afro Samurai – shows in his entire series. After getting defeated by Keith during the issue’s opening duel, Amir spends a good portion of the issue in bed attempting heal from his wounds.

During this time we meet Amir’s mother whom I was impressed to see how much she cares for her son and his well being while also supporting his studies as a samurai. It helps I’m sure that we find out that she was one of the world’s best samurai when she was younger, but still I liked that these two characters seemed to have a good relationship with one another.

Which makes it all the more heartbreaking when only a few pages later she’s killed by the Bear Masked fiend we meet this issue. Whether or not he and Keith are related we have yet to find out, but I’m keen to know.

Amir is then driven by revenge, much like Afro in Afro Samurai. This comparison isn’t a bad thing, it’s just very apparent to me as someone who is familiar with the source material. I’m in no way complaining, merely bringing it up.

If I had to wish that this comic did anything differently, it’s that it does rely a little to heavily on cliches in the action genre as well it does go at a break neck pace so there’s a lot of characters who enter and exit the stage without ever letting us get to really know them. Amir is really the only character we truly learn about to any capacity in this issue, and I do think we could’ve done a bit more with learning about what drives Keith to defect from the dojo. As we never really do.

The art also is a bit inconsistent and it’s apparent that this was made over the course of a while as the earlier pages have much rougher art to them than the later pages. You can definitely see Aguilar’s growth as an artist over the course of these 32 pages. 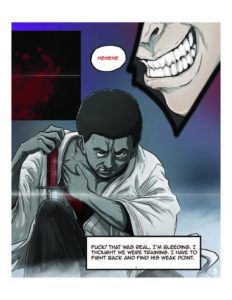 Overall, Samurai Shin isn’t a bad comic. It may need to downplay the cliches and focus more on subtlety in my own opinion, but there’s definitely an audience out there for stories like this. And it will be interesting to see where Mellis and Aguilar take Amir’s story from here.

Final Score: 3 Broken Samurai out of 5

Editor’s Note: Interested in learning how to grab up your own issue here? If so, head to the Samurai Shin FB page for that and more!

Summary: Amir and Keith are two students, once friends, who are now forced to face one another as enemies after Keith defects from their training and tries to kill Amir. Though the two are forced to stop fighting, Keith leaves to pursue his own path. After that Amir’s world goes up in a blaze… quite literally.