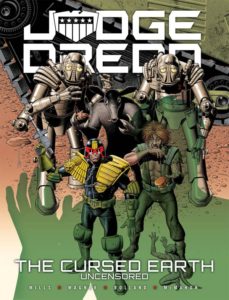 The uncensored edition of the legendary Judge Dredd epic, The Cursed Earth, has sold out in the UK – less than a day after going on sale.

Unprecedented demand for The Cursed Earth Uncensored has resulted in distributors being cleared out of stock, with copies already on book and comic book store shelves now the only ones left of the sumptuous hardcover. North American stocks are also nearly gone.

Ben Smith, head of books and comic books at Rebellion Publishing, said: “Demand for The Cursed Earth Uncensored has been unprecedented. The response to news of its publication has seen bookshops across the UK, including stores not known for selling graphic novels, ordering in substantial quantities and pre-orders reaching record levels.  It’s a tribute to the outstanding quality of the writers and artists on this story that 38 years after first publication it can elicit such extraordinary demand.”

Published in 2000 AD in 1978, The Cursed Earth was the first great Judge Dredd epic, but the story ran into trouble when two episodes – ‘Burger Wars’ and ‘Soul Food’ – featured parodies of Burger King, Ronald McDonald, the Jolly Green Giant, the Michelin Man, and a number of other prominent corporate characters in a raucous and shameless satire of American consumer culture. After concerns of legal action at the time the then publisher IPC decided collections of this classic strip would omit the satirical stories. But now, following recent changes in UK law governing parody, Judge Dredd: The Cursed Earth Uncensored reprints the story in its entirety for the first time.

Published on both sides of the Atlantic this week and priced at £25 in the UK and $35 in North America, this sparkling action-packed parody features work by Pat Mills (Charley’s War) and John Wagner (A History of Violence), complete with sumptuous art from Brian Bolland (The Killing Joke) and Mick McMahon (The Last American).

Using original artwork on loan from fans, the reproduction in the hardcover edition is second to none and includes the original colour centre spreads, also never before reprinted.