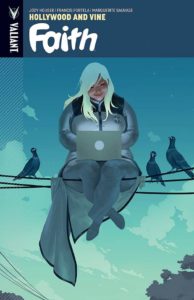 that out of the way. I’ve seen how widely accepted Faith has been as a character and people have enjoyed her first mini-series however most of the headlines announcing this series focused more on her physical size rather than her as a character. No doubt to get clicks, shares and reactions. However stuff like this always feels more gimmicky than heartfelt when so much media covers it like that. Marvel and DC regularly deal with this problem.

Reading Faith gave me faith in this book however because there’s really nothing gimmicky about it. This is a solid story with a real take on a character that represents a large margin of people who have very little in the way of relatable role models. Faith may be, as a character, nearly 20 years old having first appeared in the 90’s Harbinger series but this updated take on her propels her straight into 21st century internet and nerdist culture.

Faith is not only a superhero but also a big geek who writes fanfic, plays RPGs, blogs about celebrities and her favorite TV shows, and at the point in which this story starts has gotten a job writing for an online entertainment website. That pretty much encapsulates today’s nerdist movement to make our way of life cool and relevant. It’s because of all of this that when I first read the title Hollywood & Vine I originally suspected the vine in the title had to do with the 6-second video app but I couldn’t have been more wrong.

What I was most impressed by reading this series was the very real take on this confidant female character who generally in today’s world still faces disadvantages but instead of playing to that – which a lesser writer would’ve leaned on those obstacles to push the narrative forward and send some sort of “message” – Houser instead scribes a tale of a powerful, lovable, relatable character who has a ton of confidence in herself, daydreams like all of us, and even falls asleep during work when superheroing keeps her from getting enough sleep.

And not a single person makes fun of her for how she looks which I think is one of the best parts. Again a lesser writer would’ve used Faith’s self-esteem to carry a much less interesting narrative but Jody subverts that completely and for that we get a much better story.

Faith’s supporting cast is also filled with a variety of great characters. From @X her hacker sidekick that keeps her informed of ongoing crimes – he’s basically the Wade to her Kim Possible – to Archer who actually hails from another comic set in the Valiant Universe Archer & Armstrong. He’s actually an archer and I really like the budding relationship building between him and Faith. Though I don’t know their history the two seem very close from the get-go and even with the narrative handicap I can read their friendship as very natural and their growing relationship as the logical next step. I’m very excited to see where that goes.

I was also impressed with the handle of Faith’s coworkers who upon learning of her secret identity are really mature about the situation and though they’re a news site choose to keep her identity a secret amongst themselves so that her life can go on unscathed. This is especially surprising with Faith’s boss who begins the story as an annoying, conniving old lady who seems to have it out for Faith but is ultimately quite understanding of our hero’s dilemma with needing to lead a double life.

The biggest fault this series suffers lies in its villains, the Vine. Yup, that’s where the title comes from. The Vine are essentially the Kree of this universe who came to Earth and modified some humans calling them Plantings and them left them to live alongside humanity. The Plantings specifically are the villains of this story and they’re like the Inhumans if the Inhumans had folded into human society and laid docile rather than start up their own society and the blue side of the Moon.

Unfortunately the Plantings don’t really live up to expectations and after 3 issues worth of build up and a couple of incredible out of left-field revelations that I don’t feel needed to be a part of this story – such as Torque’s reality star girlfriend being a part of the Vine, I’m not sure what need there was for that to be revealed – the Plantings ultimately come off as mustache twirling villains who had no preconceived reason as to why now was the perfect time to attempt to take over the world.

On top of that their way of going about it, kidnapping and brainwashing potential Psiots, is laughably easily crushed by our heroes being able to pull off their mind control helmets with little to no effort or residual after effects. Great set-up to an awful payoff and something I do wish Houser could have spent more time on honing before sending her scripts off. 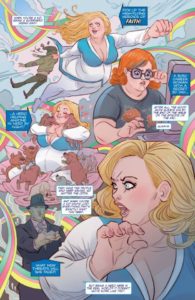 Finally, I’ll just talk a bit about the art by Portela and Sauvage. Portela does the main interior artwork and is stunning to look at. The amount of detail and life that breathes from the pages really allows for the comic to flow with little to know effort. Portela is quite talented and I feel they were perfect for this series. It’s a bit sad he won’t be returning for vol. 2 when that hits.

Sauvage does the daydreaming scenes is so surreal with their style. I really, really like the daydreaming pieces and they’re a very different look from the main pages which is perfect since they’re supposed to be taking place in Faith’s head. These pages are generally very fun and there are even a few times I feel like Sauvage draws Faith to look like Adele which is definitely not a bad thing.

Faith: Homecoming & Vine is a really strong series featuring a really strong, quirky character that I highly recommend anyone and everyone check out. Sure the villains leave a lot to be desired but past them literally everything else about this books feels perfect. That is a job well done, folks.

Summary: Hot off the heals of Harbinger comes a new series starring Faith a superhero that’s touted as being the first plus-size hero to get her first title-led comic book series. Why it’s 2016 and she’s the first I’m not sure, but here we are nonetheless. Follow Faith as she gets used to her new life in Hollywood, CA. As she tries to juggle a part-time job as an online blogger and a full-time job as a superhero.