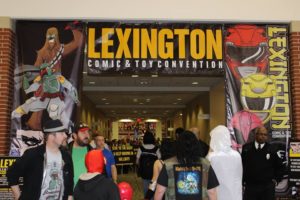 This show has become my first show of the convention season and over the years I’ve watched this show grow and blossom. I have to say this is the first time I have seen signs that it might be outgrowing its space. It’s great to see though because spaced out as it is with other conventions in a 5 hour radius it really does start things off for people in the region nicely.

The staff for this show is one of the better ones I’ve seen. They take time to answer your questions, direct you where you are looking to go and don’t have any kind of attitude with you. So nice, smart, knowledgeable folks make a convention experience so much better, especially when you’ve got large lines, crowded areas and need to find places like the photo op lines. Also they manage to keep the lines for autographs at their Media Guests booths running smoothly and out of the general public’s way, also extremely important in a crowded space.

Since I’ve mentioned them already let’s hit on the Media Guests. While Power Rangers are perennial favourites it’s also great to see some of today’s current figures in attendance. Buffy cast members always seem to delight and classic science fiction show cast members are great I loved that there were folks from SyFy’s Z Nation there. Russell Hodgkinson who plays Doc was one of the nicest, easy going and personable people to talk to and his views on the show, cast and stories were incredible to listen to. Though a big fail for me were the guys from Comic Book Men, I’ve seen that show it’s horrid, unrealistic to life in a shop and they don’t have real comic book knowledge and I think that space could have been better utilized.

Also all the Doctor Who being represented was Outstanding!

Comic Guests time. I love that the amount and quality of folks is growing. With the convention split between two floors I think it would be beneficial to put all artists upstairs together. Kind of like having the artist alley at NYCC or C2E2. The show does need more creators though and while it was a major bonus to see Matt Hawkins there, their presence needs to be boosted. Also some companies courted to be there would be good, Zenescope isn’t too far away and then maybe other small press like A 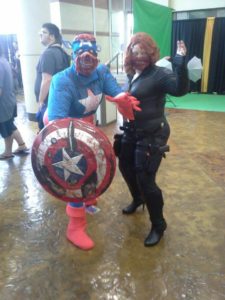 spen/Big Dog Ink, #Hashtag Comics, even larger ones like Aftershock Comics, Devil’s Due/First Comics would be incredible additions. The comic side has been growing but it really needs a hard boost.

The floor layout was really well done. The aisles and walkways were tight but not impossible to navigate, a crowded show means crowded aisles remember that folks it’s not always because of the setup! Ah the poor food court was a disaster but that’s not the convention’s fault it’s a small space and when it was lunch time on Saturday, always the busiest day, it was a wait for food so be prepared or don’t be afraid to venture out for local cuisine.

Keep the website on your radar and look for them next year it’s a great show to start the season with. http://lexingtoncomiccon.com