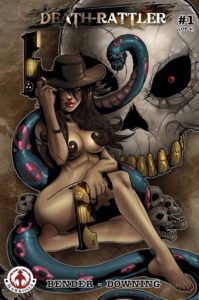 f comics and even now a days I’m seldomly checking any of it out. But when I saw some art Kelly had for Death-Rattler running around on Facebook and the like, I felt myself getting really interested in checking it out and thankfully the good Kelly allowed me to do so! Covered in fantastic art, inks, colors, and lettering from start to finish, Kelly acquired the right team for this book in my honest opinion. This is a Bad Girl I can get behind (minds out of the gutter!) as I really enjoyed her first issue far more then I did reading the only Lady Death trade I have.

I like that this is seemingly set in the Old West but with more advanced looking tech here and there along for the ride as well. Which certainly comes in handy for our one fine leading lady! Who is out for revenge against a bunch of Devils for what they did to her family some years ago and she’ll do what she has too in order to get her vengeance! But let’s hope however she don’t wind up pregnant in the process! Now with all the killing she’s done, its looking like she’s bringing on some attention to herself that she’s not gonna be too happy about when she realizes it!

While Kelly is willing to push a few boundaries in this book (like showing a little nudity here and there for example) he doesn’t entirely cross it. At least in this issue anyway and I’m curious to see how far he may go with it until it reaches the final end. Of course this being only 4 issues long makes for a sad Wrecks but hopefully in the future more will happen with this hot little number you don’t want to anger! And uhh.. Lady Rose? I really don’t think you’re gonna want this lil lady anywhere near your place!

I am hooked and ready for more of Death-Rattler and I highly recommend you all getting on board too! Though I am curious as to what happened to Rattler’s brother and I can’t imagine him being all that happy with what his sister’s doing! Some more potential conflict from that area too if Kelly decides to go that route. So be sure to head over to the Insane Comics website after reading this and grab yourself a copy! Which you can get as both print and digital! Yee-Haw! 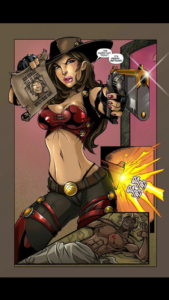 Summary: It was an age of Magic & Science, Steam & Steel. It was a new frontier, but old ways die hard. The Devil’s Cross Gang ruled the land and the law was helpless to stop them. But there was hope coming. An orphaned daughter of a murdered farmer is on a quest to rip the world of the gang who killed her pa.

The woman known only as… DEATH-RATTLER.