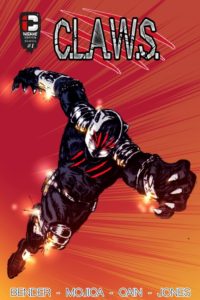 family on a ship. They were transporting an endangered White Tiger back to the Bronx Zoo, when the ship they were travelling on capsized. Bras the only survivor, swam to a nearby island. The island isn’t on any maps and is inhabited by “intelligent’ felines. The felines raised Bras, and bestowed on him the powers and abilities of each of the large cat tribes.

At the age of nineteen, Bras left the mysterious island and returned to the Bronx Zoo where his parents used to work. During the day he’s a zookeeper, and at night he fights crime as the masked crusader C.L.A.W.S..

I gotta say that I really like the premise here. Above is basic information on our hero and for a first issue I like that we get a pseudo introduction before the action started. I’m almost not sure if we needed that wordy introduction with the way Kelly writes the story here. He does a great job showcasing the skills he has and using his past to complicate his present. From a characterization standpoint this is extremely well done.

We see him in action calling upon the powers he’s been granted. We see him at one point trying to shake off the tragedy of his past to stay focused. This combined with the action we are seeing all conspire to really establish that much needed interest in the character and the desire to learn more.

Speaking of more there’s a reason he’s in this to begin with. From a rooftop he witness’ a kidnapping in process and he jumps in to save the day. Now this isn’t your average kidnapping as it plays into a much larger story and I’m looking forward to seeing how that plays out in regards to Bras’ life. I like that this ties in the mob, in this instance a Russian mob, who have taken the young woman and he’s in pursuit.

We learn who she is and what’s important about her here and it does add to her role in what could possibly be long term or it could just be the first arc. Regardless it’s a very nice set up and it gives the reader a lot to take in, get excited about and draw conclusions as to what could now happen. So it gets the reader involved in the story and that’s the important thing.

I’ll say this when using narration boxes the blue & white combination makes it harder for a reader to read, more so when the blue fluctuates. So hopefully this is going to a temporary thing. The interior artwork isn’t bad, it’s on par with what I expect from a smaller independent press book. It has potential to improve with each issue. The style itself is nice and different and a lot shading so whether because it’s depicting the nighttime atmosphere or not remains to be seen. I’d like to see a little more attention to detail in his suit the way it’s coloured kind takes away from that. Overall it’s not bad at all and i’m enjoying how it’s all presented.

It’s a good solid story plus it’s new, fun and interesting in ways that make you sit up and take notice.

Editor’s Note: Interested in grabbing up a copy of an awesome book like this? Then you can head here for the print version or the digital version!