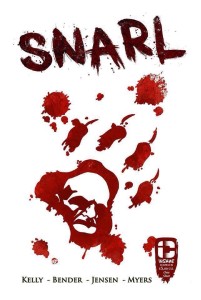 rewolves? I mean besides Americans walking around the English countryside at night. They are not fans of werewolves.

But I’m right in thinking everyone else likes werewolves, right? Of course I am. Werewolves are like the Hulk of ye olden times. They’re used to represent mankind’s more savage, animalistic side and the fear of losing control. All very interesting stuff.

But like every great monster, there’s a sea of movies, TV shows, video games and comics featuring werewolves. How do you know what’s good and what’s painfully awful?

Well, here’s one for ya! SNARL! Written by Kelly bender with art by Nathan Kelly, SNARL follows Detective Bevil and Detective Sagun as they try to find out what exactly is ripping people apart in the local parks.

Under pressure to solve the case, our heroes reluctantly turn to supernatural possibilities. With mysterious claw marks on the victims and wolf hair found at the crime scenes, werewolves seem like a pretty logical conclusion, even if Bevil and Sagun refuse to believe it.

If you want to compare it to anything, the best comparison is the X-Files. The procedural cop genre meets the supernatural. It even has the right kind of vibe, with Bender creating a nice B-movie atmosphere with his script.

Unlike X-Files, however, the heroes of the book aren’t the most likeable of people. Which is good! To a point. Creating a character that’s difficult to like seems like a difficult task, especially when they’re the heroes. But, for the most part, these guys pull it off. Both Bevil and Sagun come off as cold, detached dicks who just want to get the job done and put a bad guy away. They don’t care if you like them.

This isn’t always a good thing; there’s a scene where we meet two other detectives, one of which happens to be a Native American (Important plot point). They clearly don’t have a great relationship. Our heroes are greeted with a “Molder and Scully” joke. Ignoring the fact that it’s Mulder and not Molder, the heroes of the book jump straight into racism with a “Dances with Wolves” joke. While it goes a long way to make sure you know these detectives are in a bit of a grump, it does seem to come out of nowhere and seems a little too off putting.

Overall, it’s a good story. Werewolves, X-Files and angry cops are pretty much always a good mix. It’s fun, full of gore and horror and has werewolves. What’s not to love?

Pretty much every comic book has faults, however. Besides the sudden racism, this book’s major fault is the dialogue. It’s stiff and, at times, it’s almost impossible to imagine a real human being saying some of the lines. It can sometimes take you out of the story and you WILL cringe, but it’s not a constant thing. It’s still a very enjoyable book.

Nathan’s art is a big part of what makes this book as fun as it is. His work is very reminiscent of Eduardo Risso’s work. It does have a slightly more cartoon-ish quality to it, however, which adds a nice contrast to the subject matter.

SNARL is a book that’s worth picking up. It has some serious issues, which really bring the book down, but it’s still a lot of fun and there’s plenty in there to enjoy.

Summary: Something sinister is killing people in a Washington State Park. Is it animal? Is it Supernatural? When all the evidence points to the unexplained a veteran detective will have to go against all of his training to solve the unsolvable before it’s too late!