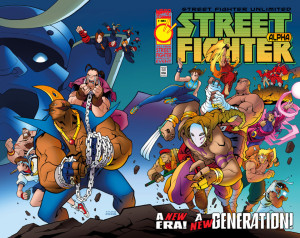 For all of you who played the game this is a no brainer series to be picking up. But if you’re like me and you never played Capcom’s Street Fighter video game? Why should you be interested in this series is the real question you’re asking right. Nowadays it’s not uncommon to see a lot of different companies going after a lot of different video games to translate into comic book form. Street Fighter however has a long history with comics. This time around UDON seems to have found what is going to work.

Multiple interesting story lines that seem to be on their way to converging into one huge explosive arc. I will admit I’m impressed with what Ken’s doing here. Even a comic enthusiast such as myself sometimes don’t recognize names. Ken’s among them though after checking the comic database I realized I have heard of can and have read his stories since probably the early 90’s. So I’m beginning to wonder why it taking so long for me to realize the talent this man has. Also it seems he’s written pretty much every Street Fighter series ever published. So he does indeed know these characters inside and out and that’s probably why we’re so I am so readily able to connect with them.

This isn’t a series that starts off from the beginning it kind of pics up I guess where everything else is left off. But even then it’s easy enough to see who’s who, the good guys or the bad guys for instance. That people change and alliances and allegiances alter periodically so that who was once a major body might not be one today. What I really liked about it though even though we’re only in the second issue is that I don’t feel like I need to have read everything to understand what is happening here and that’s a huge bonus. We’re introduced to the characters one by one and in small groups so that we see how all of these different storylines can potentially merge into one larger one.

The natural story progression here is very well done indeed. Unless I miss my guess we open if issue with what will be the biggest threat that all of the street fighters have to face. There is also a lot of smaller sub plot points that are happening this issue that go beyond your traditional hi let’s meet up and beat the crap out of each other. There’s an intelligence to the story that goes beyond what you’d expect and it’s that kind of interjection into the story that makes this much more interesting for me.

Whether it’s introspection about where you fit in in the universe or if you’re looking for old friends either way the storytelling here really does stand out.

The interior artwork very much has this Saturday morning cartoon feel to it. And I don’t mean the current stuff I mean the classic good stuff that I grew up on. So instead of that new age stuff we’re getting today it really is this elevated feel of possibly anything from the eighties to the early nineties. Yeah sometimes a body will be out of proportion or larger than life and seemingly unrealistic but then again this is comic books and it’s based off a video game and the bad guy here well even though he looks ridiculous in his body structure you understand that this is the biggest threat.

There’s an intelligent kind of fun happening here that I wasn’t expecting to see. That alone makes this more than worth your time to find pick up, read and experience for yourself.

Summary: Guile and friends are on the hunt for the truth about Gill’s Secret Society, but the answers they want lay with an old enemy — Balrog, the blood-crazed boxer! Plus, a bonus story featuring a pair of science experiments gone wrong — the mysterious Necro and Effie! 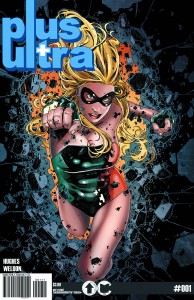 Summary: A book that takes on the hot button issue of how the female hero is portrayed in comics. Plus Ultra markets herself with her looks and her body, and sex sells, but is it worth losing the respect of her community? The evolution of a hero begins in issue one!

Seriously I think this should be required reading by pretty much everybody on the planet. There are so many good things about what I read in this single issue that gives me hope for the entire story. From seeing this young woman having to market herself and basically sell herself in order to be taken “seriously” kind of ridiculous and yet completely what needs to be done in today’s society. I also have to say I really appreciate what Jon does here and not making this a beat it over your head kind of social commentary but more of a very entertaining story in which there is a lesson to be learned.

If you’ve been reading my views for any length of time you’ll know I’m something of an art snob. Like many people I have a very specific preference for crisp, clean and detailed artwork. Matthew does one hell of a job here and I really found myself enjoying every page. From the first page when we see Plus Ultra doing her photoshoot she’s got that ‘hi I’m sexy’ but blank look in her eyes meaning she’s not really a happy person. The range of emotions that he brings us throughout the entire issue is really extremely good and something that I wasn’t prepared for. He really manages to go beyond just what you see on the page and give you the deeper meaning to the story behind it through his artwork.

For a first issue debut I have to say we got a good deal of characterization in the story and the artwork here. The introduction of a potential archnemesis style villain was good to see and her personality was just as on display as well. The dialogue and banter throughout the issue are extremely well done meat making this modern current and up-to-date with today’s world. There are moments of levity thrown into the mix so you don’t get that weighted down feeling. All the while throughout the entire story you still get that kind of feeling that this girl is kind of going through the motions looking for a way to find meaning and purpose in her life and not knowing exactly how to get it.

There’s very much a fine throwback style story happening here and that’s good to see. There’s enough various information given to us here so that it means there’s a world right for exploration. Along with some complex characters this is the kind of book that focuses on women in a way we never see you anymore, more than just a hot bod in the costume.

Intelligent, fun and definitely an eye opener I look forward to seeing where this series goes.

Editor’s Note: Interested in checking this out for yourself? Then head right here!