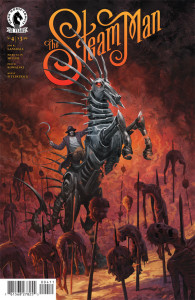 Oh my stars and garters I really hadn’t really expected things to play out like they did this issue. Alright so when we last left these guys the Dark Rider had sent a force out to stop the boys aboard the Steam Man, which had stepped on a stick forcing it to fall down. So the forces of these hairy things, kind of like bigfoot but more mystical in nature, attacked and well there we go and here we are.

Well I have to say that Feather is one heck of a character. Throughout the entire issue his dialogue has been surprising and entertaining. Also his ferocity in fighting these things really is rather impressive. The opening fighting however is what we need to focus on right now. So much happens here that it’s really one of those things that kind of where you get swept up in what’s presented and in a kind of whirlwind everything comes at you faster and faster.

While this isn’t the end of the story it’s very much a climactic kind of issue. It sets up everything for next issue’s ending. Still so much goes on in this issue that i’m terribly surprised and excited by the prospects of it. The Dark Rider seeing what’s happening on the battlefield joins the fray in person riding astride this terribly impressive steampunk horse. Oh yes indeed the visual of that horse is something to behold and it’s kind apocalyptic four horseman style which should give anyone nightmares.

This is where Piotr and Kelly come into play. While Piotr might not be a household name has very quietly been amassing quite the portfolio of simply incredible,impeccable work. The interiors here really are something to see. From the distinctness of each of the men, the Steam Man, the Dark Rider and his forces to the backgrounds everything has it’s own unique look and feel to it. Plus the way the pages are done with panel layouts helping the flow of the story move along as it does is nice to see.

Now the boys confront the Dark Rider up close and personal this issue and I gotta say I’m beginning to think this is one of those tales where the darkness wins. It would indeed be a cruel twist of fate but this Dark Rider and what he’s able to go through and/or withstand is making him one hell of a threat and one i’m not sure can be stopped anymore. I do love the grit and determination from everyone this issue and the characterization continues to shine through on every last one of them.

This is an incredible story and I love how it’s being told and it’s blending of genres. This is one that has taken me by surprise and captured my heart and imagination and won’t let it go.

Summary: The battle between the Steam Man and the Dark Rider approaches its devastating climax! Swarmed by vicious Morlocks, the crew of the Steam Man must engage in brutal hand-to-hand combat, but their wiles and wits may not be up to the task of defeating the Dark Rider’s rabid thralls!