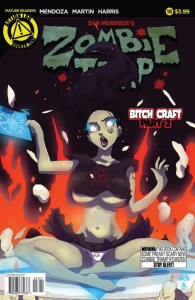 Review: The latest ZT arc continues with a shocking and bloody second part as Janey, disguised as the neglected and bullied teen Bea, attempts to get her Necronomicon back from the Mean Girls who stole it after it was downloaded digitally onto the internet the last time she got the book taken from her. Now, one thing this arc leads us to believe is whether or not just these girls have digital apps of the book or if other people from around the world could have it as well? And if so, is Janie possibly facing a worldwide epidemic of normals with the powers to conjure dark magic and the dead?

Knowing this series, probably not, that’s just a lot to put on one’s plate as far as storytelling goes. So Mendoza shrinks the threat down to a bunch of terrible high schoolers who use their new found magic to get exactly what they want out of people. Last issue we saw them kill a girl because they didn’t like her, that’s Bea who Janey is impersonating. And through focusing the threat tighter what we get is a very fun and (so far) solid arc of watching Janie have to survive high school all over again.

This time around however Janey is much better equipped to handle the pressures of high school as we all know she’s the queen of the dead now. Using some fun horror tropes combined with her signature non-merciful attitude to killing those who give her grief, we get a rather gruesome and fitting end to one of the Mean Girls this issue. It’s a rather enjoyable and satisfying scene. I mean we’ve all had those bullies in life that we wish we could have done something about them ourselves.

I really enjoyed this issue, and I’ve been enjoying this story arc over all. One of the fun things about this issue in particular is a few guest appearances from other well-known animated characters from other well-known animated cartoons. Such as Mandy from Billy & Mandy, Ed & Eddy from Ed, Edd’n Eddy, and I’m pretty sure there were a few others as well.

Harris’ art is still great. I always enjoy seeing her on the book as her cartoonish, playful style just fits this book to a “t.” I know I say every time but it’s true. Everything is just so fun to look at. And her action scenes remain kinetic and full of life as well.

What I was surprised about the most was Mendoza’s subdued approach to bullying this issue. There is a bit, sure, but not as much as last issue and for a series that one of the main attractions is watching Janie get basically shat on the entire time until she snaps, it’s something you generally come to expect every time around. Thankfully though there isn’t a lot so we get to focus more on the story and Janie’s search to get her book back. Next issue I’m sure there will be plenty though, which I’m totally fine with.

I’m looking forward to the conclusion to “Bitch Craft.” It’s great to see ZT back to form. In both story and art. Great and fun issue all around.