The comic book publishing imprint of Famous Monsters continues to expand with a a new original series. 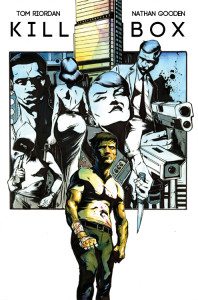 January 19th, 2016, Los Angeles, CA—After a hugely successful debut year marked by the releases of titles like GUNSUITS and BROKEN MOON and the licensing of IRWIN ALLEN’S LOST IN SPACE, American Gothic Press is forging into the hellish, violent future with KILLBOX, a new series set to debut in April.

Beneath the sultry façade of Los Angeles lurks a mysterious casino bent on making money off of murder. Bartender Timothy Choir and otherwise regular people play as undercover pawns in a violent competition that leaves the winner with millions of dollars—and the losers dead. But there is much more than mortal death going on in the Killbox, and Timothy soon discovers that winning might not be an option.

“KILLBOX has actually been a long time in the making,” says writer Tom Riordan. “I’ve been sniffing around this idea since the first run of Survivor. I remember thinking, ‘How great would it be if suddenly all these [guys] had to kill each other?’ I dismissed it as an unoriginal thought, but something about the concept gnawed away at me.”

Illustrating this brutal adventure with one of the most unique and complex inking styles in comics is Nathan Gooden, artist for Creative Mind Entertainment’s Deadeye and The Gifted. “This project scared me from the beginning, not only because of the frightening story, but because I knew it would stretch me as an artist,” says Gooden. “It’s a very ambitious and brilliantly written world, with a very unique feel that deserves its own unique art. As a result, it kept me awake countless nights—much like a good horror story should!” 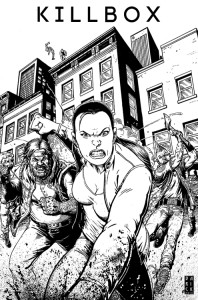