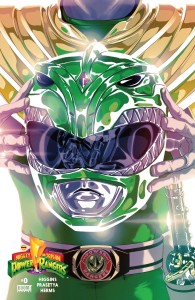 Rangers, long have they been a part of our pop culture for around 20 years now in many forms. A show that was born thanks in part to the Sentai series in Japan that’s been around 40 years now amazingly enough. And as quite a few of you know, the current incarnation of power rangers is the third Dino team currently on going on good ol’ Nickelodeon through Saban. Now when I learned that BOOM! had plans for an all new Power Rangers title, especially one set on the team that practically started it all here in America. I thought ‘Hell yeah on that!’ Though admittedly I was not too impressed the last time a publisher did something with the Mighty Morphin’ team a year or two back.

But did this starting point leave me impressed after I read it? Well… Not really to be honest and normally I’m pretty much a fan of just about anything BOOM! does. The outfits the characters had on really didn’t fit them in my view considering what they tended to wear back then and the more modern technology like cell phones really has no place either since this is the Mighty Morphin’ team which was very firmly set in the 90’s. And quite honestly, this should have kept to that. Matter of fact, it seemed like only really Tommy and Kimberly wore anything close to what they did on the show. Perhaps I’m being a little judgemental, I don’t really know but its just how I feel after reading this.

Now yes, I enjoyed the art and the colors on it by Hendry Prasetya and Matt Herms, and the story Kyle Higgins is bringing us does have my interest. As he has me wondering if whether or not Rita actually messing with Tommy’s head everytime we see her talking to him. Or if its just all in his head after his time under the Empress. Which would certainly make sense as he probably would have some strong self doubt after all the evil he did. Something the show itself never really explored all that much now that I think about it. I did also like the fact the Zords themselves got to have a little bit of time to shine, even when the Megazord itself was in use.

The fact the creative team doesn’t have to rely on stock footage or anything like that to do extra stuff like Kim’s use of her Zord to save a falling car is a really nice thing to me. And whatever Scorpina and Rita are up too at the end can’t be anything good! What happens with Bulk and Skull though? I love it and I could definitely see it happening too! Now yes, as I mentioned earlier, this starting issue did leave me a little dis-satisfied but the story itself is what has me wanting to see what happens next. So March? Hurry on up as I can’t wait to see this new plot of Rita’s fail spectacularly! Or should that be Morphinominally?

Summary: After escaping Rita Repulsa’s mind control, Tommy Oliver, the Green Ranger, joins up with the rest of the Power Rangers to combat her never-ending evil plans. Any semblance of a normal life is gone for Tommy now, but with his newfound family there lies hope for a brighter path.