Now as you may know, I’v 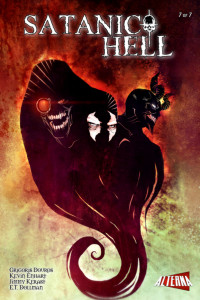 e been a fairly big fan of Satanic Hell since the beginning and has been one of the few titles out there I’ve attempted to make as much effort as I could to keep up with every issue. But if you aren’t aware of that by this point, where the heck you been!? So believe me when I say that this being the final issue of Satanic Hell (at least for now hopefully) makes me a bit sad. Its been a fantastic read that Grigoris has crafted excellently. The new looks the boys have is certainly neat to see, even if I was expecting the new looks to be a whole lot worse for them. Although I would have expected not only them but their fanbase to have issues with the new look, especially on the mental side. Though that could happen for the boys later on and it’d serve as a win of sorts for Scudder even if he doesn’t know about it. The band no doubt would have every right to sue the state of Texas for what was done to them and I honestly can’t see anybody being on the side of Texas except for its own ‘Justice System’.

And while the Church was dealt a good blow, they are still managing to limp about and its likely gonna take something pretty wild to finally put a stop to them. Course I can’t see the band being involved in that since they already went through a lot of Hell as it is during their time there. Then again they probably would if it meant they got to screw the Church over in an even bigger way. And there’s no way what happened in Texas can stay in Texas as that just seems unlikely. I was disappointed by what happens with Scudder as I was expecting more then what we saw in this final issue, karma being what it is and all. Though maybe if Grigoris returns to Satanic Hell, we’ll see something with some serious consequences for the man’s actions. At least the scientist who did the horrific changes to the boys got what was coming to him though.

I am pretty curious about the ‘Next Apostle’ and what led him to being a Hitman and the actions he takes in this final issue. That’s a story I definitely wouldn’t mind seeing from Grigoris in the future. And as I mentioned earlier, I am pretty curious about the mental issues this is no doubt to likely cause for the boys now that they are barely resembling anything normal. Could the odd experiences they mentioned near the end after all is said and done be a big clue of future trouble for them? Only one man knows for sure and hopefully he won’t keep us in the dark for too long! The fall out for everything after this issue is big and will no doubt have far reaching consequences. So if you’ve yet to read this amazing 7 issue series that will have you feeling all sorts of things through out its run, I highly recommend you read it! Heck, I’d happily watch an AMC mini-series of this!

Editor’s Note: You can grab a copy of the 7th issue at the Satanic Hell website, at the Alterna Comics website, or on ComiXology!

Summary: All hell breaks loose in the series’ epic finale as the psychopathic Saint returns, Eva goes rogue and the movement squares off against the Texas Council of Churches. With the metal band’s monstrous fate sealed before the pandemonium even starts, can Satanic Hell find a way to stop Reverend Scudder and end the religious madness afflicting the state?