We are heating up for the upcoming Phase Two books… But in the meanwhile, enjoy our new Rogues! trade paperback.

In the mythical city of Gerada, Pearl of the South and Cradle of Humanity, Bram and the thief known as the Weasel, try to survive and deal with the multiple dangers and adventures that, literally, hang over them.

Behold the most epic battle in the story of epic battles known to men, women and fantastic creatures! DRAGONS! KRAKENS! DRAUGRS! Uhhh… LOTS OF COOL WORDS IN CAPS!

This volume contains issues 1 to 5 of ROGUES!: THE COLD SHIP Published in the United States by AMIGO COMICS, this fun and adventurous series have been described as a book that “put the 80’s fantasy/sword and sorcery feel in today’s storytelling.” 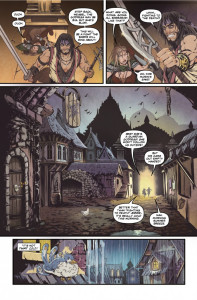 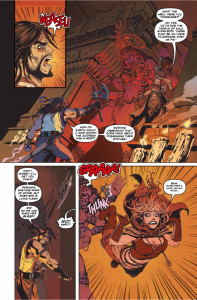 The words by El Torres and the spectacular art of Lolita Aldea illustrates a new adventure of Bram and Weasel, the two outlaws of Gelada, the mighty city. This time, their friendship will be put to the test when a ship full of undead takes Bram to join them in a quest to kill the last dragon!

“ I mean this book makes me want to play D&D again and have these kinds of adventures, and for those who never played it’s just an all-around romp of a good time! ”
–Steven Leitman, Reading with a Flight Ring

“The art by Aldea is what originally caught my eye when I saw preview pages, and once I was able to dive into the writing by El Torres I was hooked. ”
-Comic Addiction

“Rogues! is a book that doesn’t take itself too seriously, and Aldea is good at doing very nicely with reactions and other facial expressions without being too subtle about it. She walks a fine line, as the story is a bit more serious, but she manages to keep the tone light while making sure we understand that bad things are coming. In that, she’s in tune with Torres’s script.”
-Gregory Burgas, Comic Book Resources

“If the first volume of Rogues! was pure entertainment, plenty of fun, this second volume demonstrates that a great story can be told even with a bizarre starting point, with no great ambitions. (…) Rogues! is just like that: a dream, a fantasy, a divertimento, and in that, it stands out with ease.”
-Juan Millán, Comic para Todos 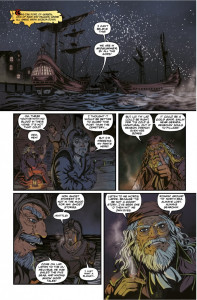 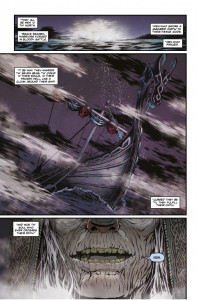 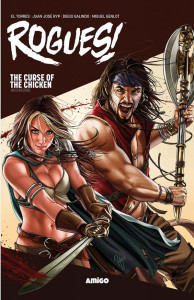 And still you can order: Rogues! The Curse of the Chicken and other Stories

From the poultry-ish and terrible consequences derived from the kidnapping of a wizard’s daughter, to the incursions into cursed and forgotten cemeteries to summon a lich, as well as being chased by bounty hunters and Black Guards, or being thrown into a prison for women, joining the Brotherhood of Thieves, and even guiding some assassins through the underground tunnels of the city in a shady mission, always wielding a sword… Being a rogue isn’t an easy job!

This volume contains issues 1 to 6 of ROGUES! Published in the United States by AMIGO COMICS, which meant the return of the first characters ever created by EL TORRES and RYP, and which received acclaim both from readers and critics.

“This comic is actually very, very good. It’s something that the industry has needed for a while and I don’t even think they knew it. ”
-Dustin Cabeal, Comic Bastards

“So hop the wall, pick the lock, avoid the guards, and place your order for the cheekiest, sassiest, quickest, (but not always the smartest) hooligans that Europe has brought us to date: Rogues! ”
-Sarah Martinez, Previews