uite honest, I’m not a wrestling fan, never have been never will be. I’m also not a fan of this style of artwork, it’s too generic or simple for my tastes. With all that being said I really enjoyed this book! It is interesting, different, and so completely not what I was expecting and I found myself really getting into it. Plus there are characters that we’re introduced to that really stand out and make this more unexpectedly universal. So my recommendation is to pick this up, give it a go, and see if you can find what I see in it.

I loved how this opened up in Japan with a former big time wrestler now training new young talent and being reminded of his past. The guy he’s chatting with isn’t all that friendly either and he’s kind of a dick really but it’s great for what it is and what it does. It moves quickly enough to seeing Dan leave Japan for the states and seeing a match in progress being changed in progress. It’s interesting actually and we meet a couple guys who I’m going to guess will play larger roles in this story. After all one of ’em is Dan’s friend and the three meet up and a have bite to eat together.

I also liked meeting Andre and Terrence. It kind of gives the reader a more well rounded look at the people Dan knows and how they fit into his life. Also whether they are the kind he wants to be around or who will try to cash in on who he was. Still it’s Andre that takes Dan to stay with Amy and she’s one of those characters that I’m puzzled and fascinated by. She’s wheelchair bound and well from the artwork we wouldn’t know if it was a guy or girl but I’m guessing the backstory for her is going to be good. How the two know each other and that she’s from before his days in the ring keep this depth to the story strong.

Then when the two talk we get the real reason Dan’s back. The mysterious Teddy once again is in trouble over his head. He needs Dan to bail him out of whatever he’s gotten himself into and the bonds of friendship on display really hit home for me. Though with all the little bits with actual wrestling stuff happening here it’s really about what Teddy’s gotten into and how Dan’s been dragged into in ways that we see as the issue concludes. Definitely not something I was expecting to see which in itself makes it hella interesting. 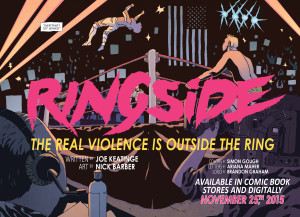 So while we get sneak peeks into the world of professional wrestling the book has more style and substance to it than you’d expect. Before you realize it you’ll find yourself into the story and wondering what’s going and what’s going to happen next. Not to mention which of the people we’ve been introduced to will have those important larger roles to play. After all we aren’t introduced to characters in comics willy nilly specially when strong characterization is involved in fleshing them out.

While the art isn’t what I like per se it works well here and for the subject matter. The tone, feel and mood of what they bring to the pages is good stuff.

Summary: THE PROFESSIONAL WRESTLING EPIC BEGINS IN AN OVER-SIZED FIRST ISSUE! RINGSIDE is an ongoing series set within the world of professional wrestling, written by JOE KEATINGE (SHUTTER, GLORY, TECH JACKET) and drawn by acclaimed illustrator NICK BARBER, combining the ensemble drama of THE WALKING DEAD with interconnected rotating perspectives akin to The Wire. Each issue will explore the relationship between art and industry from the view of the wrestlers themselves, the creatives they work with, the suits in charge and the fans cheering them all on. But that’s just the beginning. The real violence is outside the ring.