Across the world some months ago, the voices of the many cried out for something different, something fun and unique that they hadn’t possibly seen just yet. And then as if a Genie had heard them and proclaimed “Wish granted!” Madius Comics was formed and became the answer those people needed in the UK. Today, I get the chance to speak with Madius’ own Robin Jones! 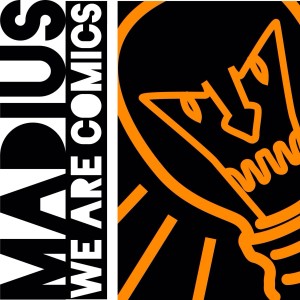 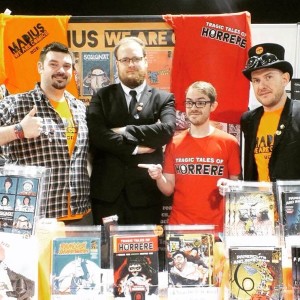 1. Hello there and welcome to the Mind Meld! For those who may not know of you, could you tell us a bit about yourself?

I’m Rob Jones, I’m a comic book writer (Papercuts and Inkstains, Horrere, The Kings Leap) and letterer. I won the ASHCAN group’s 2015 award for Lettering and appeared in the Outhousers’ 50 Indie Creators to watch out for. I am also 1/4th of Madius Comics, a new UK based comic book company who’s aim is produce strange, endearing, questioning comics which promote a sense of wonder and humour. I set the group up with fellow comic creators Mike Sambrook (co-writer extreme and editor supreme), Nick Gonzo (Writer, artist, spaceman) and Brad Holman (Artist and Print/Design guru and wearer of the finest hattery). We’ve been releasing comics since February this year and currently have 11 titles available.

2. Most awesome! Now when you say questioning, in what way do you mean by that?

By questioning, I mean comics that address issues. As much as profits of doom is a story about a bunch of idiots who bring about the end of the world, it’s also about friendship, it’s about over coming adversity and about not allowing the world to twist your own personal view of it. 50 Signal is a comic which we hope makes people
question the world around them, makes them look at exploring in a new light and find the joy in it! Ramlock Investigates may be a kids book, but at its heart, it’s a story about
the dangers of greed and multi national corporations. And of course, not letting goats be detectives!

3. Since beginning in February, what’s the experience been like for you personally?

It’s been eye opening. It’s been busy, challenging, enjoyable and baffling at the same
time! We’ve been in national magazines, worked with some of the greatest up and coming artists in comics right now, won awards, been long listed for British Comic Awards, I’ve appeared on the Outhousers’ Ones to Watch list, we’ve had our comics called masterpieces and called shit and it’s just generally been a whirlwind of
amazingness. Working on Horrere was incredible too, the reaction we’ve had to that has blown me away and so that’s been a very positive experience for sure!

4. Do you guys do print and digital versions of your titles? Or just one of them? 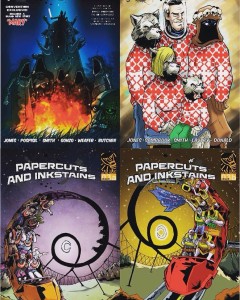 5. What led to the use of Madius as a name for the publisher?

Well it’s an amalgamation of Madness and Genius, and we like to think that our comics
tread the line Inbetween, and such, Madius was born.

6. What’s been the main struggle, (if experienced any) that Madius has experienced as a Small Press Publisher?

Promotion can be a point of contention, as can distribution. We do everything ourselves, we don’t have a press office, we don’t have administrators, it’s off our own backs, fitted around our families and work. We have personally contacted hundreds of reviewers and bloggers, we’ve built our own networks and such and that has taken a lot of manpower and hours! Distribution is difficult, we initially had comics in a few shops throughout the UK but have slowed that down after a couple of bad experiences, with communication breaking down and not receiving money for comics sold etc.

Which is a shame, as we’ve also had some amazing experiences with comic shops, like Inter-Comics in Huddersfield, Atomic Comics in Hartlepool and Nostalgia Comics in Birmibgham. They’ve been incredible.

7. How well have readers responded to the titles from you guys?

It’s been a mixed bag, but that’s to be expected as not all peoples like the same thing. However, we’ve had some simply astounding support from many fans, buying all our stuff, sharing things, promoting us and stuff. It’s been astounding to be honest, those members of the Madius Masses have been brilliant. We’ve also had some amazing responses from creators, such as Cullen Bunn, Darick Robertson, Iain Laurie, David Hine and more.

They’ve all been so supportive, and positive! It’s an absolutely amazing experience. The fan backing, the Positivity and everything around that makes everything worth while and we could not do this without all of you! So thank you, all of you!

8. Well hecks yeah! When it comes to print vs. digital, what’s your thoughts on it?

I think both are fantastic mediums. Digital allows you to easily add in making of and process stuff to your comics with very little effort and cost, something which is difficult to do in a print comic as you need to offset content with costs. It’s nice to be able to include interviews, extra pin ups, work in progress stuff and sketchbook things, and so digital comics make that a much easier options, however, nothing beats holding a comic in your hand, the feel of the page, the smell of the ink. Both have their qualities!

9. Is there any plans for a shared universe?

We’ve knocked about ideas, but it’s more of cameo thing than a shared universe… at the moment anyway! If you look closely in “No” in Papercuts #1, you can see the Funk Soul Samurai from the comic of the same title, fighting a monster in a booth. We’ve got other ideas in the pipeline, but as yet, no, no shared “Madi-verse” yet. 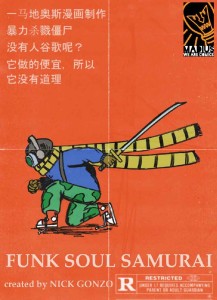 He’s got the Funk!

10. You mentioned a pretty great reaction over the Horrere title, what can you tell us about that book?

That book was a year and half in the making. We (myself and co-writer Mike Sambrook) worked very closely with artist/illustrator Alisdair Wood and created something we are blown away with. It’s a collection of four horror stories, with one ongoing story which will run through the series. The illustrators we worked with on that are top notch, there’s Neil Ford, Gareth Sleightholme (Whom I also worked with on Madius’ The Kings Leap) and Al McLauchlan, and we even got a sneaky back page image from Ian McQue which was incredible. Cullen Bunn recently took to Twitter to give us a big shout out, Sean Phillips (The Fade Out) seems to really dig it, Duncan Fegredo (Hellboy), Marc Lamming (Avengers), Rob Williams and more man have all given us a boat load of positive feedback about it.

It’s been mind boggling! If you want to see for yourself why, then we suggest heading to www.horrere.zone as the first pages of each story are available for you to check out there! it’s also available in print from there and in digital from http://www.payhip.com/horrere

11. Where do you hope to see yourself and as well as Madius in the next five years?

Global. I’d love to have a distributing deal with diamond by then and start getting our stuff properly “out there” however, if we’re still doing what we’re doing now, and people are still enjoying the books we’re putting out, then that’s worth it. We just want people to enjoy our stories and get a kick out of what we do. So to still be doing that in five years time would be amazing.

12. You mentioned wanting print copies to be exclusive, why is that?

When it comes to Papercuts, our artists are paid in back end pay, therefore, to ensure they get a maximum amount of money, that’s why we do that. We purposely run papercuts at a loss to do that. Since we aren’t in a position to pay upfront page rates, that’s our option, and so we want to ensure we sell through a print run to make sure our artists get a decent amount of money for the blood, sweat, tears and cuss words they’ve injected into their pages!

13. What can fans expect to see next from you guys?

More Papercuts. More Horrere. More Ramlock. More 50 Signal. More Average Joe. More Kings Leap. Expect some new titles next year as well, No Love, Griff Gristle – Here Be Monsters and more comics I’ll be lettering. We’ve got some shorts been accepted into some other comics as well, such as 5D Comics’s Obscura and FutureQuake. Mike and I are also looking at pitching some ideas to some of the bigger hitters as well. Madius are going to move forward onto bigger and better things in the coming 12 months, so watch this space!

14. As for my final question, what advice would you give to those looking to get into the business or are just starting?

Just do it. If you write, write. Keep writing, but look at learning another comic related skill, except lettering…I got that covered…and use that to your advantage. Offer art swaps for colouring, inking, lettering etc and don’t be down heartened by negative press or rejection letters. Use it to your advantage and take something positive from it, whether it is how you approach your writing, the dialogue, pace etc, turn it into a positive and move forward. Comics are an endurance game, so just keep at it.

I’d also suggest forming a collective, such as Madius. Get together with like minded friends, artists etc and release things together as a group. You get cross exposure, perhaps cross sales and it helps with convention costs etc to be able to share the load. Plus, what better hobby to have than making beautiful art and creating amazing stories with your buddies? I’ll tell you now, there is none.

Editor’s Note: Many thanks to Mr. Jones for taking part in this!