Insanity is a heck of a thing my friends, and some people wield it really well! And as you might recall, I dived into that very thing awhile back courtesy of the gang known as Insane Comics! But now it seems like I’m getting pulled back into it but hey, at least I’m not alone this time! Which makes the insanity that much more fun! But no worries, we won’t bite! 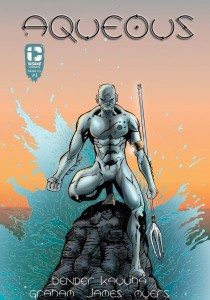 Summary: A water planet in space and the three dominant subterranean species which control it’s waters.

Review: So the good man Kelly Bender sent me a few titles of his recently that he has through Insane Comics. And I wound up going with the first issue of Aqueous pretty much by random chance. I’m glad I did too despite a few minor issues I had with the title as Kelly nicely set things up in this first issue. A planet mostly made of water with a little bit of land mass and three aquatic races each serving a different role in their respective areas??? Well hecks yeah! Though the ending of this issue has me wondering quite a bit about the past of this planet and if you’ve already read this then you’ve got a good idea of what I’m talking about. The three man races of the waters are: The Aquaeos, grey skinned fellas with sharp claws on their forearms and rule the Southern Sea like a boss. The Aquadais, a dark grey skinned bunch with sharp claws on their hands who role the North Sea but don’t seem to want to rule just that area alone cause they all greedy and such. And finally, we got the Aquafeos, a pink skinned bunch who have no defenses and rule in the Equator.

These guys are the ones the other two races listen too on a lot of big stuff and are the ones you bring a problem too. Though having proof to back up your claim is a big thing for them before they can do anything. Which, you know, makes a ton of sense as otherwise chaos could result from a badly made decision. Something the Dais bunch clearly use to their advantage as we read on through this issue. But it seems like to me that only the Aquaeos are the only bunch who don’t have any jackals in their camp, at least as far as they and us readers know anyway and Kelly may just wind up throwing that in to wreak further havoc.

Now two of the problems I have with this comic lie in two areas, primarily the characters themselves and the speech bubbles. Unless you’re looking closely and paying good attention, you might get somewhat lost due to how similar some of the characters look face wise and there’s only a few characters who we learn the names of and even then you have to be keeping a good eye on who is who. Though it is interesting that the females of the three races all seem to have blonde hair in various lengths. At least that has been seen so far when it comes to the hair color anyway. Props to Mivik though for being an outright bad ass! A loyal bad ass at that to his King and Queen.

As for my second issue regarding the speech bubbles, there’s times when you have to lean in pretty close to be able to read dialogue properly due to the white color used for the text and the speech bubbles being blue anytime the Aquaeo speak. Its a slight issue for the Dais who’s speech bubble is grey with the white text while the Feos bunch have pink and the white for their speech bubbles. Though I am happy some thought is going into making sure the different races have their own identifiable speech bubbles, so kudos to Matt James and Micah Myers for that. Just that maybe use a little less light coloring for the blue, grey, and pink in the future.

Over all, this is a good starting issue and I am looking forward to seeing what Kelly has in store with this. Especially with all this intrigue, potential war, back stabbing, a potential wedding, and an apparent need for something on an island that brings me back to an earlier point about the planet’s history! So grab up a copy of this and get invested! And a little Insane too! 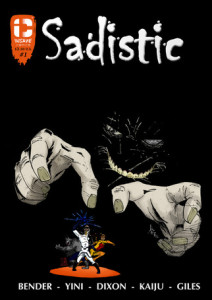 Summary: In a future version of America people with “powers” are a reality. There have been ones fighting on the side of justice and protecting the innocents, while others use their “gifts” for evil means.

Then there is Sadistic. A diabolical menace whose only motivation is to create the most chaos possible. He has a death-wish with the unfortunate “power” never dying. His power is he absorbs other souls to constantly be reincarnated again and again and again….

So the world is left wondering, how do you stop a psycho who can kill himself anytime he wants to escape?

Review: Well I do understand that lately the whole appeal of characters like the Joker and Harley Quinn being all the rage that it’s inevitable that we’ll see a slew of characters based on them. The real question is, how are people going to make their character different and set them apart from the norm? Kelly does that nicely here, so sure Sadistic is a crazy no morals murdering kind of guy he’s also got a super power. An edgy alternative, what kind of crazy dark goth look are called these days anyway, kind of angst ridden bad guy who loves being who he is certainly stands out.

Not as crazy crazy as I thought he’d be though, the heroes we see this issue can’t seem to do much about going up against him. Though I have to say I kind of liked the way that we meet Haste and Edon. A kind of super-hero werewolf and a speedster yeah they don’t come across as your atypical heroes and from what Kelly gives us here they are definitely a pair I’d like to see more of. The two are trying to uncover the mystery of what Sadistic is up to and why he’s chosen particular victims so while we do that we don’t see much of why Sadistic is doing anything.

I like the explanation of how Sadistic’s powers work too. Actually I’m pretty impressed with how the whole issue is presented to us as readers. While sure this is a book about one individual we’re seeing about him through various other viewpoints instead of solely directly which only serves to enhance the mystique behind him. Then we see what’s happening at the White House and you begin to wonder if Sadistic is really the bad guy here. Though I have to say I did enjoy seeing Sadistic enter the White House and then seeing two patriotic heroes Starz and Strypes. So now there’s more and more happening here than meets the eye though so it’s something to keep an eye on.

After the main story we’re treated to a Zero issue and I have to say I enjoyed that immensely. The artwork was great and the story itself really gives the reader a look into the mind of the man and how he works.

The artwork in the main story isn’t as polished as it could be. There’s potential here though there are moments where it seems like more time was spent on the page. It’s a matter of becoming more used to working on a deadline I suppose. Still there’s great stuff happening here and we’ll see how it evolves as the series progresses.

Indie books/self-published stuff are putting out some great things these days and it’s nice to see them going out and taking risks with the subject matter.

Editor’s Note: Head here to grab up a copy in either print or digital form!