This jumps right into things and Brian doesn’t waste 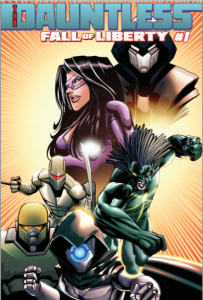 any time getting the story started. It might have been nice to have a point of reference about the year or type world they live in, some kind of immediate background vague enough for exploration but to set the stage as it were. I will say the character bios were nice because it gave me a glimpse at the cast so reading the story was easier with characterization.
When the team goes off to a site on a mission this is where the background I would’ve liked would’ve come in handy. They head to what seems like an abandoned city in ruins. Immediately since the team was called in to go help with the extraction of information, kind of like babysitters in case something goes wrong, you know there’s more to this place than meets the eye.
I’m really liking the concept for this series there’s this dystopian future, government dysfunctional team and even some humor in the writing that keeps this being run of the mill ordinary. Brian you can tell isn’t a seasoned writer but you can see the potential here. Some transitions in the storytelling don’t work as well as others. I would’ve like more about the government leaving the supers behind or expanding upon Obsidian’s observations but that comes with time and experience and it certainly doesn’t take anything away from enjoying the story.
I will say there is some really characterization going on. There’s a nice sense of their personalities here and you can some potential in regards to how Liberty has to work to keep her team together and working. There are odd moments of dialog 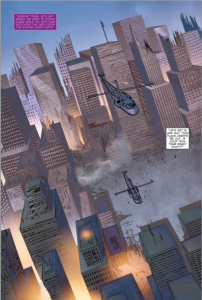 ue that I liked because it’s different and leaves you wanting to know more about them.
While I can appreciate the whole jump into action and learn about the characters on the fly I was hoping for the same attention to the bad guys. Are they robotic or human or some form of mechanicalized ghost? A question that is highly motivating in coming back and reading the next issue to find out. This area was supposed to be devoid of life and yet they find people who kill anyone who enters their domain without hesitation. So the mystery behind them is well portrayed.
The interior artwork here demonstrates how far the industry has come and that there’s talent everywhere these days. Body proportions are pretty solid and there’s nothing weird that shouldn’t be. The use of pages, panels and backgrounds are nicely utilized. Phase’s shape-shifting powers prove that they’ve got this whole transitional body morphing well in hand and that’s actually impressive.
Overall this is pretty solid first offering from these folks and by working together they’ll get better. The book is off to a nice start and I look forward to the growth and progress they make and getting to know these characters and this world they live in. This is an investment folks and I one I hope you make because there’s that little spark of something here that I hope you see like I do.
Editor’s Note: Interested in all things The Dauntless? Then head here!
The Dauntless #1
Self-Published 2015
Written by: Brian Stewart
Pencilled by: Dino Agor
Inked by: Jeff Morrow
Coloured by: Jasen Smith
Reviewer: Steven Leitman
← Previous Post
Next Post →