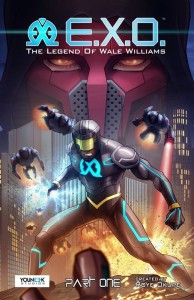 Review: One of the things I absolutely LOVE about Roye Okupe’s book here is the fact its not even set in America like a large portion of comics are. It being set in Africa really refr

eshing for me as it provides a lot of opportunity to see something different. The names of various characters through out this book is one of those things that is pretty great, even if I’m not exactly able to pronounce those names right off the bat. Wale (our main character), Tunde, Jide, and Lagoon City, Lagos Nigeria are among the things in this story that Roye is doing that gives everything a legitimate feel that we definitely aren’t in Kansas anymore. Young Wale also definitely has some anger issues where his dad is concerned and its understandable too since the guy spends more time working and the like then being around for things going on in his boy’s life.

Something that later causes something horrible to happen just cause the man wouldn’t take the time to listen to his own son. Wale’s leaving after it for a few years has me wondering what all he got up too while he was gone and hopefully we get to see any of that as this story goes on.

And while some might think Roye’s character is some sort of Iron Man rip off, I can promise you that’s not the case at all as Wale and his suit are their very own thing(s) entirely. The fact that Wale’s somewhat of an angry and stubborn guy when it comes to just about anything unless pushed is a clear sign he’s his own man. Naturally his love interest isn’t all that impressed with him considering how one track minded he is regarding the two of them instead of giving her a chance to talk about what she’s wanting to talk about. Although I kinda wondered for a bit if she was already married but something she does later on when ol’ Wale is in a serious bind is something that was probably pretty obvious to happen from the start. 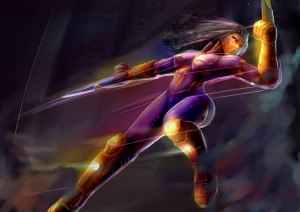 Though I think the big chest aspect is a little much considering that’s seen quite a bit in Marvel and DC where the girl is concerned. Other then that she is pretty bad ass and I imagine it’ll be all kinds of awkward fun if she winds up being a mentor of sorts for Wale. Now where that might be awkward, the family connection he has with someone else is going to be a big issue for Wale since the guy’s the big bad of the story. I kind of had the feeling he was the bad guy but I wasn’t entirely sure about that until we got to the big reveal when Wale confronted him. So him and the love interest are probably the only real two things that are seen coming a mile away.

Roye and his creative team for this first book is very solid and I hope he has them on board for the second book as otherwise that would be a crime if they weren’t involved. But there is one point where some dialogue is repeated and I’m wondering if that was intentional or something Roye didn’t catch. Other then that minor issue, E.X.O. – The Legend of Wale Williams is a good solid read with a great cast of characters and I am looking forward to seeing where Roye takes Wale in the future after Oniku is dealt with. I urge everyone reading this review to check out this title! Especially if you’re looking for something not set in America like a lot of comic book stories are.

Editor’s Note: To grab yourself a copy, head here!

Summary: Tricked into returning home to Nigeria after being absent for five years, Wale (Pronounced Wah-Leh) Williams embarks on a journey to investigate his father’s mysterious disappearance. Wale’s father, Dr. Williams, was a brilliant engineer and inventor who worked for a dubious organization called PryTeK, a global leader in technology and innovation. When Wale returns, he finds a city and country he barely recognizes; cycles of governments have passed over the years, and while the now affluent city thrives, a whole population of poverty-stricken citizens are being ignored and imperiled. Over the years, corruption within the government, corruption that seemed to have been eradicated, has simply, evolved.

Left behind for Wale is a cryptic Nanosuit which grants superhuman abilities. Initially, Wale does not embrace the suit or the idea that he could be a “hero,” but his journey takes him through a crucible of events that prepare him, and he slowly begins to realize he needs the suit’s powers to unravel the mystery behind his father’s disappearance and save the city from grave danger. That danger comes in the form of the CREED, a radical organization led by Oniku, an extremely intelligent, calculated and sociopathic extremist. Motivated by his desire to eradicate what he calls a “weak and myopic government,” Oniku embarks on a campaign to incite an insurrection by launching strategic attacks that lead to high civilian casualties, bringing Lagoon City to the brink of civil war. On Wale’s long and grueling voyage to stop the CREED, a hero is born. That hero is EXO.