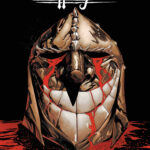 Warning: Potential Spoilers Ahead! There’s been a lot of interpretations of the infamous character known as Robin Hood and the characters involved over the years, one of which includes a female version known as Robyn Hood over at Zenescope. The character is usually seen as an affable fellow, ready to fight if need be and […]