From his humble beginnings as a Reviewer of Comics to Creating Comics, this is Chuck Suffel. Join us as he enters the Mind Meld!

1. Hello there! And welcome to the Mind Meld here at IndieComiX! For those who may not be familiar with you and what it is you do, could you tell us about yourself?

Hello Rob! Flattered to be asked! I’m Chuck Suffel, a writer from NYC. Until about 2 years ago I ran a review site called WhatchaReading, which I loved doing, and I was published in several comic anthologies. In 2020 I realized that I wanted to do something a bit different. Sherlock Holmes and The Wonderland Conundrum is a part of that.

2. You’ve got a title coming out soon called Sherlock Holmes and The Wonderland Conundrum, what can you tell us about it?

In a nutshell Holmes finds himself hunting the streets of London for a missing girl named Alice. And he runs across some very strange characters along the way.

How it came to be is another story. Several years ago I was putting together a few pitch ideas for yet another submission to an indie anthology, this one wanted mashups of public domain characters. I played with a few different ideas but I kept coming back to Holmes and Alice. Holmes was entering the Public Domain at just that time so I thought he’d be a safe bet. The problem was that 8 to 10 pages just felt too tight. I’ve written 4, 8, 10 page shorts for anthologies and yes you can tell almost any story under those limitations and sometimes shorter is better but I had too many situations I wanted Holmes in, too many character interactions I thought would be fun to explore. I was right I had a blast unleashing the utter weirdness of the Wonderland characters on Holmes’ logical and seemingly unflappable personality.

3. If my understanding is right, you chose to entirely Self-Publish the book instead of going through something like Kickstarter or a Publisher, what made you decide to go this route?

To prove that I could. I have been reading comics all my life, reviewing comics for around 12 years, I’ve been in a number of anthologies, I helped to run social media for a small press publisher, I’ve interviewed writers, artists, publishers you name it. But I have never taken a comic from concept to finished project. As for self-funding, we’ve all seen how messy it gets when a crowdfunding campaign funds but doesn’t deliver. I knew I was probably going to make some mistakes along the way and I wasn’t prepared to disappoint backers if it all went off the rails. So I went through that list of names we reviewers have, you know the ones, the people you can actually just reach out to and ask questions of, and I wasn’t disappointed. The Indie Comics Community is amazingly supportive, I’m lucky to count so many creators among my friends. 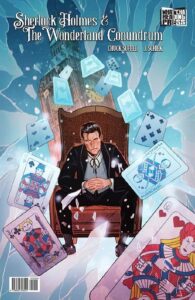 4. You have J. Schiek and Cardinal Rae on board as part of the Creative Team for SHTWC, how’d that line up come to be?

Both came recommended by those very friends I mentioned. Early on I contacted Mike Perkins (of Invader Comics) and he did an editing pass on the script and helped me get Jeremiah Schiek onboard. That was a total win! J is not only an amazing artist but he’s a very cool person to work with, and to know. You will be seeing his name A LOT in this industry.

When it dawned on me that I had, in fact, hired an artist and we were ready to get started I realized I had no clue how to proceed. So I reached out to another friend and amazing creator Erica Schultz, she was kind enough to let me hire her as a production editor. She helped me with so many things, I cannot tell you how indispensable she was to this project. She’s brilliant and unbelievably talented. She was also responsible for Cardinal Rae doing the lettering, another win. Everything was moving along nicely until I saw the email from Erica asking when the cover art would be ready. I hadn’t lined up a cover artist, I hadn’t even thought about it. I realized I was going to have to get some names. Again I reached out to the community. Every Indie Creator I know got an email asking for cover artist recommendations.

When I reached out to Roberta Ingranata I was sure she would pass. Come on she does Doctor Who for Titan, she’s going to do my cover? But she was so cool and actually excited to do it! She then put me in touch with Warnia K Sahadewa for colors and just like that, I had an amazing cover, it was honestly kind of surreal.

I’m sure reading all that made this project sound like a breeze. Am I glossing over the bumps in the road? The delays? The imposter syndrome? When I clicked submit on the order to the printer I damn near threw up! The reality is I felt like a neophyte every step of the way and I probably will next time as well. 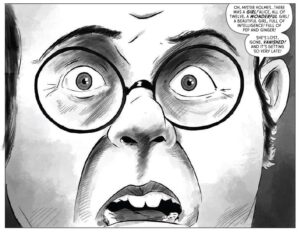 5. As a reviewer yourself, what’s the transition from comic book reviewer to creator been like? What was the defining moment that led to the change?

I love to write. I loved writing reviews and I wrote them for one reason, to make sure comic fans saw how much really really cool stuff is out there. The reality is I’ve wanted to write comics since I read them, and I even got to do a script rewrite (unpaid, credited as a “story consultant”) for a book a friend was working on way back in the 90’s, but taking the plunge and creating a book was something I never thought I’d be able to do. So I guess now I’m a creator. Cool. There are definitely things I’ll do differently next time. But there will definitely be a next time.

6. Aside from the potential fun of flipping Sherlock Holmes’ logical world upside down, was there anything else about Sherlock Holmes and Alice that kept bringing you back to them?

Honestly, just a love of Sherlock Holmes. I enjoy that character on so many levels, the straightforward short stories that Doyle wrote, the myriad of tv shows and movies, the adaptations and reinterpretations in comics there is something about Holmes that is just fascinating as a character, he is such a strong personality that he is perfect to play with in any genre. As for Alice? I’m 52 years old, Alice’s Adventures in Wonderland & Through the Looking-Glass, and What Alice Found There are perennial favorites, I read them as a child and to my children. The use of language, the “literary nonsense” of the world made it a perfect place to frustrate Holmes. We know Holmes does not suffer fools lightly, and what better fools are there?

7. After having read SHTWC, I have to ask, how much of what Holmes experienced is real and how much of it isn’t? As this, for me at least, is a story that leaves you with questions by the end of it.

That is intentional. The role the hookah and the tobacco play in the story is definitely meant to leave that question unanswered. I considered giving the whole book a more dream-like visual style but I like the ambiguity, I hope the reader does too!

8. Are you planning to return to this crossover in a future story is this one-shot just that, a one-shot? And what can we expect to see from you next after SHTWC?

I truly don’t know. I’ve considered bringing Holmes into contact with other literary universes of the same era, there are a few in the Public Domain that could be interesting or revisiting these characters there is definitely more story here. The one thing I have resisted is having Holmes go to Wonderland. I prefer the uncertainty, was it real, could have possibly been? So, maybe? I do have 2 projects I’m currently working on that are not Holmes related

Make comics. I know it sounds stupid but I have wasted so many years wondering if I could, if I should. If you love to draw, draw. If you love to write, write. The information is out there. There are resources on every aspect of creating comics and I have found that the people in the community love to talk about making them.

10. For your own personal preference, Print or Digital?

I love print comics. Digital is a necessity but print is just the greatest. (If anyone needs to be convinced they should go find any issue of Mind MGMT by Matt Kindt, the paper, the messages and doodles in the margins, the use of negative space. Yes you can do it digitally but the physical presence of a book like that is just wonderful.)

11. What helped get you into Comics originally?

Like so many of us old guys, the spinner rack at the candy store was my gateway. Garage sales, used book stores, when I was a kid I would buy any comic I saw. Then comic shops became a thing and I was truly hooked.

12. As for my final question, what advice would you give to not only new Reviewers but those looking to get into the Industry to make Comics as well?

In both cases I would suggest you ask yourself a serious question. Why? I wrote reviews because I wanted to introduce people to the comics I was enjoying and I make comics because I love to make comics. Write/draw for the Big Two? Make multi-billion dollar superhero movies? Launch the next fandom dot com? Those things I can’t even begin to comment on. 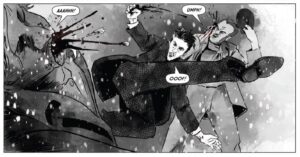 Editor’s Note: HUGE thanks to Chuck for agreeing to take part in this interview! Sherlock Holmes and The Wonderland Conundrum will be available October 19th in both Print and Digital formats! And be sure to ask your LCS about copies as well!

And if you enjoyed this interview and generally enjoy what it is IndieComix does, why not consider dropping us a nickel over at our Ko-Fi Page?