She’s not just a Publicist who helps supply IndieComiX with great Comics News, but a lover of Music, Comics themselves, and Film. In addition to that, Melissa Meszaros is a Survivor with a Memoir titled ‘Heavy Metal Headbang‘ due out in March. With that said, I had the chance to interview her about her upcoming Memoir, so with that said, let’s read on! 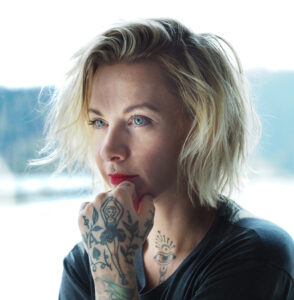 1. Hello there, and welcome to the Mind Meld here at IndieComiX! For those who may not be aware of you, can you tell us a bit about yourself?

My name is Melissa and I’m a comic book publicist (that sounded very al-anon). I’ve been working in entertainment for over 20 years, first in music then in film, and dabbled in survivor mode post-graduation and during the recession. I’m passionate about helping folks realize their creativity and dreams by sharing their work with other passionate folks who can appreciate their vision.

2. You’ve got a Memoir set to release in March titled ‘Heavy Metal Headbang‘, a Memoir that’s based on your life following getting hit in a crosswalk on the night you were heading to a Judas Priest show, how emotional can readers expect the Memoir to get?

“Head bang” aside, if you’ve ever dealt with a life-altering change, loss, with feeling different, have had anxiety, substance abuse, mental illness, or felt like an outcast or suffered unfair judgment—even simply you take solace in music—it could be a tearjerker. The response has been unbelievable so far because of folks’ ability to relate without ever sustaining a severe traumatic brain injury.

It’s a hopeful story though. If you can hit rock bottom and still work your way out, or even try at that, you’re doing great.

3. Ultimately, in addition to Mark Irwin and Mark London (great guys!), everything led to the creation of Don’t Hide PR, what made you think of that name?

While in recovery, I couldn’t do much, nor did I want to. I worked when I could and slept in between therapies (which I had to go to, like, six of them). I had no sense of taste, smell, my hearing was off, my eyes and balance were misaligned, I seriously didn’t recognize my own face. I tried to do things—to go out and be normal—but it felt futile and pointless at the time where even the potential of Kurt Cobain coming back from the dead couldn’t roll me out of bed. I felt like I didn’t exist and remained on autopilot without understanding or asking why. Just as I started getting back to myself, I lost my job and was like “eff this”—so I went further into hiding. Moved to the woods, the whole bit! I honestly considered giving up the entire career I built over the years to become a tattoo artist.

It all hit an impasse when comics folks started asking if I’d work on their projects. It just so happened that after so many queries, I simply couldn’t say no. Not only because I was passionate about the work, but also it was the first time I really felt like I was good at something, that I was someone again, even without a moniker at a publisher.

Saying to myself each morning, “don’t hide today” helped. It became a mantra, and ironically, it’s exactly what I now tell folks as a publicist. “Don’t hide your artistic works from the world, don’t hide yourself from the world.” If you’re that passionate, your truth shines through and your people will find you.

4. With as much as you’ve been through since your injury, what advice would you give to those in similar situations?

Be patient. Take your time. Trust the process. Keep going. While things might not go back to exactly the way they were, they will get better. Life will get you where you’re supposed to be.

5. Music and Comics go hand in hand for you, what led to those two things having such an impact on your life to this day? 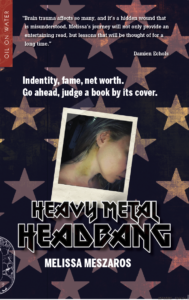 Comics are my passion because of the freedom of the medium. Art and words and letters and editing meld together from multiple moving parts, and an all-new version of the story is born and takes on a life of its own to create a totally cohesive piece from a multitude of minds.

Music has always been with me. It’s my healer, my hero. It’s the one place I can always go to find belonging. Had I not had the audial memory map of songs to trace back to memories that music created for me, I probably wouldn’t have my brain 98% back together…most of that is owed to the workings of Sub-Pop and Jack Endino.

6. Wow, you are definitely an inspiration for sure. Since the start of the Pandemic, has it impacted you any?

Thanks! If anything, with the mishegas I’ve been through, I hope those who have felt even just a little lost can take solace in my narrative.

By the time the Pandemic rolled in, I had already been in a self-inflicted quarantine for a year and a half. Actually, a few months prior to March 2020, I tried out an office job curating an awards show, but my fear of driving, cars, and traffic got in the way. That’s when I really started to focus on Don’t Hide as a full-time business.

With conventions shut down, it actually made publicity more of a necessity for folks. I did my best to help those who were stuck, drafting free blanket PR campaigns to fill what would’ve been a virtual “artist alley” of sorts, alongside sliding scale low cost campaigns if they needed an extra boost.

7. Where do you stand on the debate of Print VS. Digital?

Both serve a purpose, I feel. Digital is perfect for reviews when it comes to simple distribution and costs. But Print is the OG, it’s what keeps the community and the local shops we love in business. It’s a huge part of our social outlet, too, in both conventions and at home.

As for the eco side of things, perhaps one day someone will come up with a halfway point where comics can be printed affordably on recycled paper—that’s my dream anyway. If you wanna talk distro, well, I know that everyone wants wide distribution (and justifiably so), but the #1 thing that old school PR teaches is it’s local, regional, coastal, bicoastal, national and then international.

The internet broke that, but this gives more reason for folks to handle their own distro, which saves on hiccups when it comes to being dependent on a conglomerate for shipping and receiving dates.

It’s not every day that a Hollywood publicist gets hit by a car.

Melissa Meszaros is on her way to a Judas Priest concert when the accident happens. The traumatic brain injury she sustains changes everything. Her life is turned upside down. Her steady job as publicist and trusted friends and colleagues are called into question. Even her own reflection staring back at her from the mirror seems alien. As she navigates the legal and medical battles before her, Melissa also begins to challenge her own fractured self.

For a publicist, identity is everything. What begins as a series of snapshot memories soon becomes an inspiring personal tale of recovery, as Melissa questions both her own identity and her career. What does it mean to suddenly disappear from a rock’n’roll lifestyle when your whole professional life has been dedicated to making others famous?

Heavy Metal Headbang is a defiant memoir like no other, confronting our celebrity-obsessed culture as well as the social challenges that come with recovering from a life-changing injury.

8. You’ve mentioned work in Film, any roles or is it behind the scenes work?

Only behind the scenes unless the creator suggests otherwise. Once, there was a director who mentioned me in an interview they did for a CMT doc. I’ve also been pulled into red carpet and gala photos with a few celebrity clients, which made me feel super awkward. That’s not a publicist’s place, IMO. Hang out a bit, be personable, but know your place as a professional.

Example, watching the Amazon show Flack gives me anxiety, but illustrates the main reason why I chose to leave both Music and Film. It’s a bit sensationalized, but pretty spot on. (And no, that’s not me promoting Bezos, hell no, box shortages are the reason for our paper shortage and why print comics are held up! Lol)

9. With ‘Heavy Metal Headbang‘ set to release in March, what’s next for you, as well as Don’t Hide PR?

My focus is always my clients, unless the universe decides to pull me in another direction, but after this much time, I’m pretty sure comics PR is where I belong.

There have been talks of adapting the book in different forms, and I have a little surprise coming up with an amazing friend and comics creator, but honestly, I’m proud enough that it made it as a book. And with Headpress nonetheless, working with David Kerekes and Jennifer Wallis, they are, like, my dream team of publishing professionals! So easy to work with and very present.

I’m also very slowly working on the sequel. Head injuries rear many surprises, and some things that are unresolved, do show up way later than you expect.

10. As a Comic Book Publicist, is the work involved difficult?

Depends who you’re talking to. I have close friends who are publicists, but I also have PR nemeses (believe it). The top things to make the job easier is being honest, kind, flexible, be a good listener, understand it’s the creator’s “brain baby” and not your triumph of personal gain (hence nemeses). Have a little humility. Know you’re going to make mistakes because you’re human. Know there are folks who will pull Hollywood trickery and you have to circumnavigate. And it’s always a surprise.

It’s also a complete balancing act. PR takes up a lot of time, and honestly, freelance is way better than in-house for me, because that way, I don’t feel like a machine. You need room to write, to breathe. Who you are and what you have to give is what you’re bringing to the table.

If you can handle the above, you can maybe do PR.

11. For my final question, what advice would you give for those who have an interest in doing Publicist work?

Entertainment PR, corporate or nonprofit? I mean, if you’re going to get into this gig, you have to care about what you’re promoting because it definitely shows if you don’t. Publicists need thick skin. If you can’t handle rejection (or ghosting for that matter), don’t bother even dipping your toes in. You have to stay lateral. Know your work is never done and be prepared to work on your downtime. Know you are working with people to support their dreams. This all should give reason to LOVE WHAT YOU DO—makes life worth it. And folks need to love publicity to do it.

Editor’s Note: Melissa has dedicated the following video to the late Andy Wood of Mother Love Bone and Soundgarden’s Chris Cornell. And a huge thank you to Melissa for taking part in this interview and sharing some of her amazing story of her road to recovery. Heavy Metal Headbang will be out on March 3rd in both Print and Kindle format and you can pre-order here!