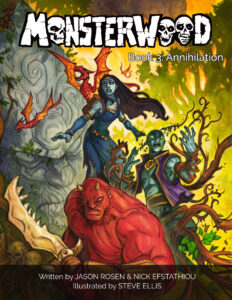 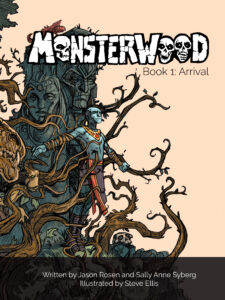 Destruction spills out of the city. The Zumari, fearless and loyal fighters to the Regent, seek to return his niece, Jocosta, and punish those who have sheltered her in Monsterwood. Their orders are simple: burn Monsterwood to the ground. As the young Jovis and Jocasta ready a small army of rebels to unseat the Regent, they must overcome the physical and mental challenges they face. Monsterwood is an unforgiving school, and the Zumari are the fiercest fighters in the land. The road to the city is hard and strewn with the bodies of those slain by the Zumari. The rebels bear witness to this destruction as they make their way to their final destination: Revolution. The Regent plots from his throne, secretly guided by his spectral council, as he awaits the arrival of a mysterious and deadly stranger, known only as the Northman, a warrior whose only joy comes from killing. Jovis and Jocasta must lead the rebels to the city, for a battle is coming, and not all those who enter will survive.

“First and foremost, I hope readers get a great fantasy adventure story with engaging characters that they can relate to, past that, my biggest wish would be that it becomes a story that gives people something to hold on to,” said Jason Rosen. “There is so much division and chaos in the world right now, if Monsterwood can entertain the reader and simultaneously give them the hope of a more unified, more peaceful world, all the better. It’s my spin on the classic hero’s journey. That type of story still resonates with me, as they do others. Many of the themes explored in Monsterwood are what we are seeing play out in the world right now. Who are we individually? Who are we collectively? What is our purpose? What can we, as an individual do to make the world a better place, and what is the cost of doing so? I am lucky to explore these thoughts and this story with such amazing collaborators like Nick and Steve who have helped inspire and help bring my ideas to life.” 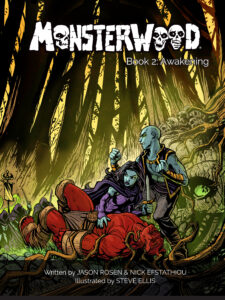 “There’s an incredible dynamic and energy when we brainstorm—working with Jason and Steve on Monsterwood has been exciting and enlightening,” said Nicholas Efstathiou. “It’s special in that it’s a world of heroes and villains, of growth and exploration, and amazing potential. Be prepared for the bad guys to be bad, and the good guys to do whatever is necessary!”

“The world we’ve put together here is really unique, the characters are fun, the story is powerful and exciting, and the monsters are a blast to draw,” said Steve Ellis. “In this book I can really push the fantasy artist in me while still doing comics. Jason has a very definitive idea of Monsterwood, while remaining open to expanding aspects of the world and story, so being a co-creator on this book is a great opportunity to really stretch ideas and designs. The exciting part for me is working with Jason and Nick to get the characters that were established in the first two books into the full realization of who they are. There are a lot of difficult things, emotional things that happen in these stories that would not appear in a major publisher’s book because they would be afraid to address serious issues. This book is both the culmination of all the work that we’ve been doing on the Monsterwood series the last few years and a wonderful beginning for some of the characters on a new journey.”

With its outlandish creatures, strong female characters, significant twists, sinister villains, and tons of action and adventure, Monsterwood Book 3: Annihilation Kickstarter is the continuation of a tale that fans of The Dark Crystal won’t want to miss! To learn more, check out the Monsterwood Instagram!