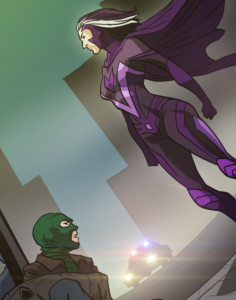 Typically from what I’ve noticed when it comes to the Superhero Genre in Comics, especially in Indie titles, the first issue tends to feature the origin story to one degree or another. Violete: Unstoppable is one of the very few that DOESN’T involve the origin story and I like that. A lot. Oh, sure, I’m left with a question or two as I read through the book but that definitely doesn’t keep me from enjoying the story. Questions like how she got her powers and the design ideas for her suit. And why purple? Because according to an old friend, purple is evil! But seriously, the suit is a very nice look but it has one glaring issue. Namely, how easy it can make for causing her identity to be exposed if her face gets caught on camera. And all it takes is one lucky (or unlucky rather) moment for that to happen. Bringing not only trouble for her but especially for her parents, whom seem to be having a few issues of their own every couple of years. How that eventually gets resolved is something I’m curious about.

Along with the issues Violete seems to have with local authorities since they don’t seem to like her all that much! I admit I was a little worried at one point when Violete seems ready to give up after getting her ass kicked by her first Super Villain experience. Which had me about ready to lose any respect for her but we see how that ends up going and not in a bad way either thankfully. I like how she gets the win where Rampage is concerned later and I’m curious if we’ll be seeing him in that form later in the future or as his regular self. I’m also curious to see what else our hidden bad guys have in mind to bring down Violete and if they happen to have anything to do with her issues with the Police. This issue and its most recent second issue both have been through Kickstarter and both have been successfully funded! And if I’m right, by the looks of it, Violete is part of a larger shared verse that Ed Jowett and Jennifer Martin have in the works.

Something I just might have to check out at some point!

Editor’s Note: If this caught your interest, head here to grab a print or digital copy!

Summary: Being a lone hero seems easy, initially, but when the police hate you and supervillains are running around, where do you turn to for help?