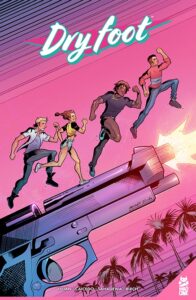 Ahh… The 80s, a well known time for one reason or another that still has some influence in the here and now. Especially where Miami is concerned given how wild the 80s were for that city and of course we can’t forget about the fashion where certain types of shorts are concerned that might as well be underwear in this day and age. And its Miami that this story is set in and where we meet our four teenagers by the names of Mariana (an aspiring Major League Baseball player), Angel, Diego, and last but not least, Fabian. Now, planning to rob the drug lord who basically controls things is a really stupid idea. Especially when you’re a teenager but teenagers do tend to think they are immortal around that time period so there’s that. I also want to say here and now that I really enjoy the fact that Jarred Lujan infuses so much of the Hispanic culture here in this story. He easily could have put in lead characters that are white but didn’t and the interactions and the use of the Hispanic language just makes this book feel that much more alive.

Which is great considering this is 1980s Miami after all. And I love that despite the time period, Mariana isn’t some girly girl and is essentially ‘one of the boys’. Not even hesitating to get in a fight if need be! Of course, she’s the main one of the foursome who is the voice of reason, though Angel later kind of helps in that regard. Which… As we later see… His intentions (however good they might be in his own mind) go in such a way I wasn’t expecting and had me going ‘holy shit!’ once the plan goes into motion and things go from there. Though one thing I’m curious about is how exactly none of the other three knew who Diego’s father is given just how known the man is to the area but it sure does explain a reason for why Diego wants to mess with the Order of Things. Even if it is a really (dumb) bad idea.

Jarred Lujan, Orlando Caicedo, Warnia Sahadewa, and Justin Birch are all excellent in this story that is heartfelt yet ultimately heart breaking when all is said and done by the final page. And with how things ended, I’m curious to see if there will be more to come in the Dry Foot world and if the kids are really all that safe like they think they are. Dry Foot the TPB is out in stores tomorrow on February 24th wherever comics are sold in your area! Not only that, but you can also head to the Mad Cave website to purchase a copy there!

You know, it might be fun to do a fan cast of this story. Hmm… There’s an idea to write about later.

Summary: Set in Miami during its most dangerous and decadent decade, the 1980s, this coming-of-age tale follows four teens desperate to escape the drugs and violence of the city. Together, they plot a heist to steal large sums of cash from the most dangerous gang on Calle Ocho, Los Marielitos. Dry Foot is a fearless story infused with Hispanic culture that deals with friendship, family, and sacrifice.