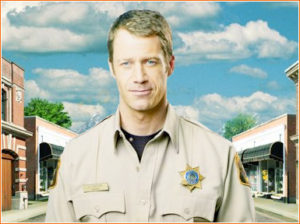 And we are back with a new ‘If Its Possible, Why Not?!‘ And this time I’m going to be talking about one of my favorite tv shows, one known as Eureka. And no, not to be confused with the anime called Eureka 7, sorry folks! If you’ve somehow never heard of this until now, where have you been!? Under a rock or some such!? If you’ve had your nose in some random tabloid, I say to you good sir or ma’am to get it out of that and onward to some place where you can watch some Eureka and then buy 5 seasons of pure goodness! Anyways…. Onward with this!

Eureka was something that showed up way back in 2006 of July 18th and lasted 5 seasons. Would have likely been longer had expenses not been an issue. But that seemed to be more Comcast’s thing then SyFy’s. Coincidentally, I graduated high school in 06, yay me and yay that year for being cool for both these things! One of the things I loved about this show was that even with all the Science involved, you never got lost with anything. And the show presented fans with several possibilities that largely went un-explored. Such as the alternate time line Henry created in order to save his lady love Kim Anderson from the clutches of death thanks to Nathan Stark’s desire to tinker around with something known as the Artifact. Which that is another thing that was never really explored fully and just quietly faded away after basically using a young kid named Kevin as a conduit in season 2. The alternate timeline was something that presented the possibility of a wealth of stories that could have been told.

Perhaps not on the show itself, but in the form of a novel or an on going comic. Now I know there was a comic that came from BOOM! Studios but as from what I remember, was only really set sometime during season 1 and didn’t touch on the alternate timeline. Which the BOOM! Studios title is something I’ve been meaning to read since I love anything to do with Eureka. Same for the novels, though I believe those as well had nothing to do with the alternate time line possibilities from season 1. Nor neither the comic or novels also touched on the other time line possibilities the show gave us with season 4. But if I’m wrong in my thinking, do let me know! As mentioned earlier with the first timeline change, a 3 or 4 year period of stories occurred that weren’t told. I think if given the chance and given to the right team and publisher to create the comic. We could easily get to see 3 or 4 years worth of stories get told. 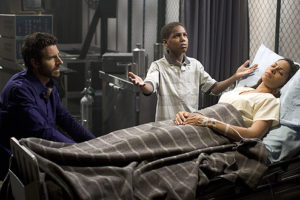 Nathan Stark watching Kevin go all Artifact like in an effort to heal Allison, his mother. 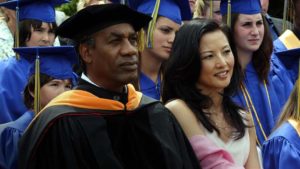 Henry ‘Jack of all Trades’ Deacon and the lovely Kim Anderson during a moment in the alternate timeline.

Henry and Fargo during the second Christmas Special.

I know I’d love to see the incident with invisibility that renders the town dog LoJack permanently invisible. That’d present some fun possibilities of seeing him bug the crap out of the town’s Animal Specialist known as Taggert! On a side note, I think Taggert having his own solo title would present some good stories to tell as well since he tends to more or less wonder about. And I’m not sure about any other Eureka fans, but I’d have loved to have seen a What If type situation where Sheriff Carter and his ex-wife Abby had gotten back together. Even if it would only be for a short time. Again, just would need the right creative team and the right publisher to do any of this. Maybe BOOM! Studios would be willing, or perhaps IDW. BOOM! did fairly well in capturing the spirit of the characters of Farscape so why not? IDW manages to do the exact same with Ghostbusters. 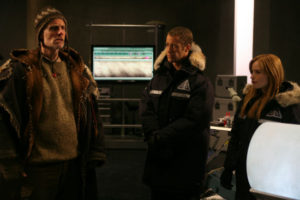 Although feel free to share who you think the right publisher would be! Another thing that bugged me was the lack of knowing anything that went down between Sheriff Carter and the dry cleaning lady named Callie that caused them to apparently part ways. That’s another thing that could be explored in maybe say a season 6 continuation title as a flashback. Which with that idea of a season 6 as a comic, we’d finally get to see the child of Carter and Allison. 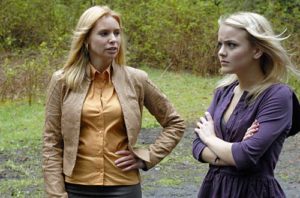 Jack’s ex-wife Abby and their daughter Zoe. A moment that was essentially the calm before the storm so to speak! 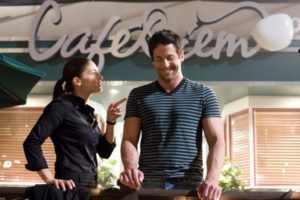 Something that’s been a bit of a teaser on two separate occasions. One being the first alternate timeline incident and the other being in the final episode of the show. Something I think the show’s creators possibly loved teasing us with. Events in season 4 also presented us with another possibility of a wealth of stories that could be told in a year or two time period as it seems like events went a little differently around the time of Zane’s showing up. 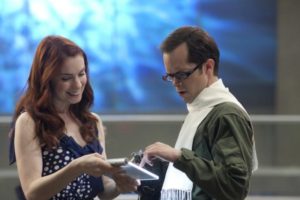 Holly and Fargo! The ultimate Geeky couple! Fargo’s actions towards her in the episode ‘Reprise’ is beyond amusing. Darn hypnotic suggestions!

Giving fans a chance to see just how different things were for the characters in that time period up until the time change happened thanks to the Bridge Device and Grant doing what he did. Other What If or otherwise types of stories I wouldn’t mind seeing is more Carter/Tess, because it felt like that relationship got something of a raw deal. Both in the original and new timelines. There’s just all sorts of great ideas that could happen, and if they never do. That’d be a pure grade A crime for sure. Have your own thoughts on any of this? If so, do let me know! 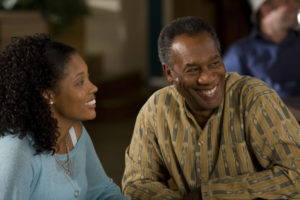 Henry with his lovely lady wife known as Grace. Yay for alternate timelines!