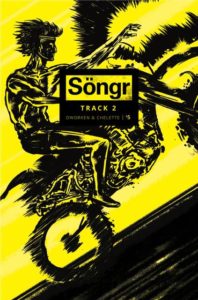 Ha ha ha ha! Its time or a brand new second track from the Songr album! A track I like to call ‘Stories and Dreams!’ Okay, so that’s probably about the extent of me trying to be catchy or some such where this title is concerned. If you remember my covering the first track (sorry, my bad) then excellent! If not, go check it out! I can wait! Arye Dworken and Anthony Chelette introduced us to the world of Songr and its primary caregiver, Musik. Both of whom were essentially born thanks to all the wonderful sounds of music our world has to offer. Now some time later, bad music has begun to pretty much affect the place in an unfortunate way, which is why we can never have anything nice as it is. This as some may remember, prompts Musik to bring in two troubled outsiders to not only deal with that situation, but to also deal with them as well. Since both aren’t exactly helping Songr’s issues and its something that is definite need of changing.

Okay, so I guess you don’t really need to go and read my review of the first issue (unless you’re just awesome like that) as I just summed up things for you fine folks. Now while issue 1 had a little weirdness going on that our two troubled leads quickly experience, the weirdness isn’t exactly around in the second issue. Well, save for maybe Tony the resident Superhero’s wild entrance. But this doesn’t take away from anything, as far from it. As it shows that while there is something of a weirdness to be found in the land of Songr thanks to how certain aspects of music literally come to life, the more serious side of things is also very present without sacrificing any kind of believablity. Kudos to Arye and Anthony for pulling that off! And aside from ol’ Tony, we also see another new character in the pages of the second issue. One that has quite a bit of mystery going on! Which has me darned curious about and I can’t wait to see what Arye and Anthony have in mind with this character.

Hopefully his intentions don’t get to be realized! As they just might be as bad as the mighty Yeezus! I’m glad that issue 2 seems to give us more of Sophie and Evan’s separate journies a bit more equally. Hopefully this can keep happening but if not, no big deal as sometimes things happen. A cryptic remark of Kurt’s near the final pages of issue two where Sophie’s concerned also has me curious. And I can’t wait to see what her reaction is where his response is concerned! Especially since the girl was brought unwillingly to Songr! Along with how Evan gets out of the current mess he’s in! So guys, don’t keep readers like myself waiting too long for that third issue! Or ol’ Yeezus might come a callin’!

Editor’s Note: Head here to grab yourself a copy of the second issue of Songr!

Summary: Jaded music journalist Evan and and soulless mega-pop star Sophie traverse further into SÖNGR, each one, reluctantly, on their own respective journeys as they seek redemption in an elseworld manifested by music itself. Accompanied by talking eagle named Freebird or a zen warrior named Kurt Cobain, Sophie and Evan are intent on returning to the real world…but Müzik, the gatekeeper of SÖNGR, has other plans and it involves the two interlopers joining forces, defeating the malevolent Dark Lord and saving music and, along with it, humanity.