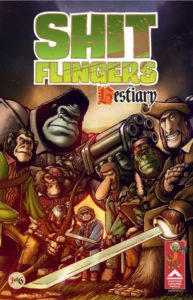 S**t Flingers: Bestiary #1 is something that was sent my way several months ago but hadn’t gotten around to reading until now. Which is another dumb move on my part as this is something I should have read right away instead of waiting. Not only is the title unique, but so is the cast of characters themselves considering they are all in the time period of the mid-1400’s to late 1500’s. Where you’d think men turned into various Simian races wouldn’t be allowed to live on due to magics involved. And I’m sure the fine furred folks from the Planet Of The Apes would be rather appalled by Humans turning into their kind as well! SF: Bestiary #1 was also a successful Kickstarter project last year as well for those who haven’t heard of this title until now. And with such a unique name for a comic book, you’d know for sure if you hadn’t heard of it before! I’m also rather thankful that the old styled lettering by Renzo Rodriguez seen in the credits and info pages isn’t seen through out the first issue that Ken Reynolds does in regards to lettering.

As I disliked having to lean in as close as possible just to read it. And even then, I still had trouble. I get what Jimmy Furlong and friends were going with, but perhaps in the future that bit of lettering’s tweaked some so its easier to read. Of course I might be the only one who has this issue for all I know. When I first began reading this, it at first felt like to me that I wasn’t reading from the beginning. Then again, perhaps I’ve gotten a little used to being exposed to origin stories that start first in most cases. Captain Guillame Midnight, Grenouille, Haine, Blagueur, Sabot, Jambon, and Chabot. Our fine Simian crew who were once French Soldiers of the 15th century until they did something they shouldn’t have. What the terrible crime is that they did is a mystery that will perhaps be revealed in future issues. I’m curious as to why the witch who turned them into various Simian races chose that particular punishment and not something a bit more fatal. But again, perhaps we’ll get answers in future issues.

I love that SF: Bestiary makes use of actual History and certain mythical creatures for the story. Kudos to Jimmy Furlong, Pete McQue, Jeff Aden, and Jack Chambers for successfully mixing the two since it could have easily gone wrong. And I love that despite Grenouille’s frog being rather special, its not used as a sort of deus ex machina for every single problem the group has when dealing with a threat. Though I imagine there’s a temptation there for the writers! I’m curious as to how Grenouille managed to get such a wonderful frog as I doubt that witch would have wanted him to have such a thing. Chabot’s also probably one of my main favs of the characters seen here as despite his small size, he doesn’t let anything stop him from going to town during a fight! Baldaquin, who helps keep the Simian crew in line, is someone I wouldn’t mind seeing more of in the future. Especially since he’s not only helpful, but also unwilling to take anyone’s crap where perverted men of the cloth are concerned. 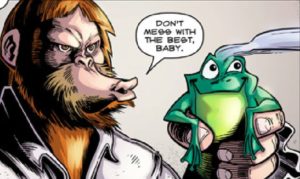 Even if it is likely to get him in trouble! Which is so not cool. And if my understanding is correct, it seems like the Flingers are immortal? Another part of their punishment for their crime perhaps until they’ve repented? Which is certainly a truly harsh punishment as I imagine being stuck in various Simian forms would eventually take a toll on their minds. The fact none of them seemed to have expressed strong dislike for their new forms is surprising. Unless they have and its not been shown. Haine’s another character I like because I imagine those with a lisp would be able to connect quite a bit with him. But does he have that lisp because of his transformation or from before? But its good to see no one really mocks him for it. Of course, with his size, its easy to see why no one would!

I know I certainly wouldn’t as making fun of a Gorilla would practically be suicide! Andrew Hartmann, Renzo Rodriguez, Daniel Bell, Tony Suleri, John Kirkham, and Berry McClain all do fantastic jobs with their art duties in my view. And are definitely artists whose work I would love to see more of in the future. Whether its on SF or on other titles. Tony’s especially was quite different compared to the rest during the ‘Mad Gods and Monkey Men’ story. As his art looked like the kind you would see in a painting for example. His art also kinda leaves one open to interpretation of Z’Kextoraak’s form since beyond the many eyes and teeth, its an interesting challenge to make out just what it is one is looking at. Its unclear if Paul Little or Charlie Hogg did the colors for that story but regardless, they do superb jobs all through out the book.

S**t Flingers: Bestiary is a truly fantastic read with some wonderful moments mixed in through out it. And I for one can’t wait to see what Jimmy has in store next when it comes to the world of the Flingers. Especially if he intends to have them live on to modern times! Which would be an interesting thing to see all things considered!

Summary: For their part in a terrible crime a group of 15th Century French soldiers are forever cast out from the world of men when they are cursed by a powerful witch into a different species of ape. Captured by The Inquisition they are smuggled to Rome and coerced into the Bestiary; a secret organisation located deep beneath the Sistine Chapel. Led by their new employer, a young Thomas De Torquemada, they begin a new life fighting occult monsters, demons and the heretical enemies of the Church.

Shit Flingers: Bestiary chronicles their collected adventures from 1453 to 1585.