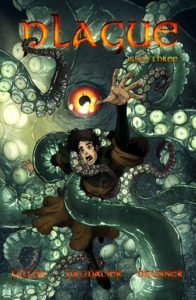 This was my favorite issue yet by far. This time around the story takes a bee line into more mythological territory giving us Trolls, Shapeshifters and a Kraken attack. All the things I live for, really. Our heroes are still being hunted down by the Warbishop Jean de Moray but it’s not long before his chances at finally taking them are once again foiled by an outside force.

While I am surprised with where this issue ends up, especially with only having two issues left to go after this one, I was still entertained throughout and impressed by just how much was being accomplished in only 20+ pages. Unlike the first issue however it never felt like we were being thrown way too much all at once and the pacing felt much sleeker as well.

I’m really enjoying the Odyssey vibe I’m getting from Plague as our heroes adventure the countryside and come into contact with all manners of different enemies and magical creatures. I kind of wish the story could be longer so everything could breathe a little more plus we could also see a lot more as well.

I really want to get to know more about this world and the histories of these races and I’m a bit sad that we’re only getting to know them as their long histories are coming to a close. If I had to say what I disliked the most about this issue however it’s where the story ends. 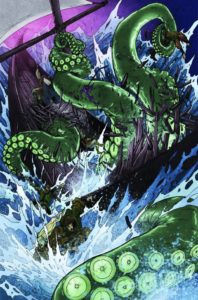 We end one a cliffhanger that, while exciting, isn’t so fantastical that I found myself blown away and sitting on the edge of my seat of how things are going to play out. It’s an exciting ending as I’ve already stated but there’s just so much more I want to see that I kind of wish we had gotten the entire sequence in this single issue.

The characters are all still really enjoyable and it does feel like they take a bit of backseat for this issue but that’s not really a bad thing. It gave us an opportunity to learn more about this world’s different creatures or focus on other characters that might have needed the page space. I really, really enjoy the aesthetic of the trolls. They look like trolls out of Lord of the Rings but with more rocks for skin. Not unlike Doomsday from DC. And seeing them pop straight out of the rocks that cover their skin was a genuinely awesome and awe-inspiring moment for me as a fan.

The art continues to be awesome. This was probably the best the series has been so far in terms of art as all the characters and fighting looked really crisp and fluid. The Kraken fight was awesome to behold and the scenes of Shapeshifters turning into Walrus’ were incredibly done. I’ve already gushed about the Trolls. Although my favorite panel artwise in the entire issue actually involves the Warbishop.

After the Kraken fight Jean de Moray shows up in the water floating on a piece of ship that’s in a ‘t’ shape and it looks like he is laying in a position similar to someone being crucified. Obviously the symbolism is not lost on me but there’s something about that panel and how natural it comes across that had me looking at it for a few moments before moving on with the rest of the book. 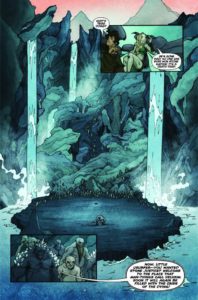 Issue #3 was peak Plague so far, and I’m really looking forward to what comes next.
Final Score: 4.5 Stone Justice Brawls out of 5

Summary: Our heroes are pursued through the English Channel after Moray calls on the power of the Ark of the Covenant to spread pestilence across England. Meanwhile, in the cold North Sea, ancient magic awakens the legendary Kraken, forcing the selkies of Iceland to come to Robb’s aid. But it’s “out of the frying pan and into the fire” when old feuds reawaken between Tegg, a Scottish spirit warrior, and the trolls of Norway – it’s a fight to the death in the Nordic underworld!