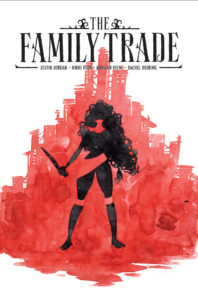 The first thing that struck me when I opened this book, as we see the Free Republic of Thessala, a.k.a. The Float, is that both artistically and thematically, it feels very much influenced by European Comics literature.

My initial impression continued as I worked myself through the next few pages, it had a very familiar feel and warmth to it, whether intentionally or otherwise, to something that Marc Caro and Jean-Pierre Jeunet might envision (City Of Lost Children).

A sprawling, cramped, junk world, constantly evolving and growing on top of itself, like the home of a serial hoarder turned inside out, instantly dark and disturbingly quaint in its charm, its claustrophobic shanty streets and shacks piled upon each other, with the towers of the wealthy shooting upwards, high above the filthy metropolis below.

It is with that thought we have a perfect opening line to accompany it; “The problem with rich people is that, to a man, they seemed to be obsessed with living up high”.

It’s a line that has both a literal and metaphorical meaning to it, the aspirations of the wealthy and powerful seem to be consistently focused on a game of Kings, Queens, affluence and control, something all too familiar with the ruling Clans of the city.

Thessala was formed a long time ago to become a central and neutral state at the heart of the world’s trade, similar to the hold that the East India Trading Company once enjoyed in our own one. (Don’t worry, we’re invited into a brief history early on in the first issue, to bring you up to date with the evolution of the world.)

“The Family” are a secret guild of sorts, that ‘moderate’ the city to keep a balance of power, but recently, a new player has entered into the political arena, Stagger Berghardt, who has been recently rising in popularity with the disillusioned general public

It’s something that is definitively relatable, and there seems to be more than a little ‘wink’ in the direction of the current world stage politically, in particular, a nod to the fervour surrounding a certain toupee-clad, orange-skinned individual who spends too much time on a Golf course – or not enough, perhaps.

Like mostly all Politicians, Berghardt is a liar, a manipulator, and a disturbingly influential psychopath.

It is with this growing level of concern, The Family’s head, The Bookmaker, prescribes our lead, Jessa Wynn, her task; to prove herself as an Assassin and remove Berghardt as a threat.

WARNING: SPOILER AHEAD! CONTINUED AFTER THE JUMP!

Jessa Wynn fails in the task, barely making her way out alive, she is brought to The Bookmaker to address the situation, accompanied by Jessa’s Uncle, Christian, who is, in turn, the Cousin of The Bookmaker also. 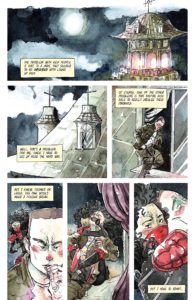 Jessa, like her fellow family members, works a day job, in her case, as a Teacher, of all things. Which makes sense, really, as a speaker of 6 languages, she’s ripe for the task, but additionally, this ensures a sense of invisibility and unlikeliness as a clandestine regulator of the city at night.

Of course, one has to query whether such a role is even suited to Jessa’s capacities, as The Bookmaker also questions. Jessa is young, and from as much guidance as she’s received from Uncle Christian, perhaps The Bookmaker is correct to question the judgement of Jessa and Christian, but is also somewhat guilty himself in his own assessment of the two, given his fondness for them.

Ahh, Nepotism, don’t ya love it?

But as the consideration on how to remove Berghardt continues, his “Right-hand Man”, Mr. Mikkaelsen, steps up security, as Jessa attempts to prove herself.

Unfortunately, as if this were not enough to be thinking about, Jessa discovers that The Family may not be so secret. As Berghardt appears to indicate, there is a Mole within The Family… 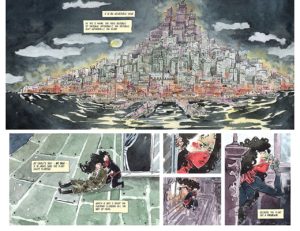 That’s the basic skinny up to issue two of this new ongoing title, to summarise, perhaps a good likeness for someone wanting to know about it as a sound-bite, “Assassin’s Creed, as envisioned by Jeunet, according to the Gospel of Gaiman”.

Wow, that was punchy, I’m getting good at this! 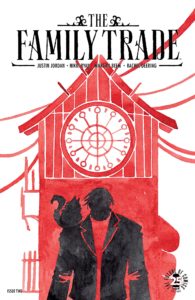 In critique of the issues I’ve read so far, aesthetically, though the art from Morgan Beem is not traditionally a preferential style for me personally, it grows on you as you progress.

There’s almost a mentality of Sid Mead’s conceptualism of 2019 Los Angeles in Bladerunner as well, in its bustling lower streets, through to the levels of upper society, the architecture increasingly growing in grandeur as it does, like a status symbol, propped high above the madding crowds, ever serving to them as a reminder of their place.

This city, devoid of conventional power, is charged by magic, its streets lit with glowing Lampreys in small Fish Tanks.

Atmospherically, we’re set a tone that embeds itself into the mind quickly and remains steadfast, whatever likenesses I can throw at it, these are the nearest available comparisons, but let me tell you, the world which we are presented is very much its own.

It’s alluring and charismatic in its dystopian qualities, a refreshing change to the usually depressing, “all is doomed”, pessimistic approach to such environments we are normally presented with.

That said, I did find some imagery required a little more visual focus at points, attempting to decipher what I’m supposed to be seeing, but I can’t say this disrupted my reading experience that much, in fact, there are only 2 observations that I would make here in criticism of the work; 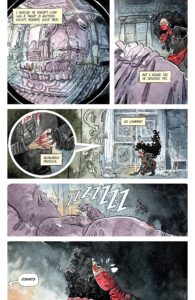 First, on panel one in the start of issue #2, there is a section of dialogue in the middle bottom that has been placed right over art line-work, which was distracting and annoying, since it wasn’t very clear in reading. There were other areas available to the right of the panel that would have served for better placing in a caption bubble instead.

It’s not a great evil, but an annoyance, and surprised me, as Rachel Deering has considerable experience as a Letterer and as a Writer. This is the only genuine criticism I have on the production side.

At a story level, I am curious to know why Jessa, who is presented to us as quite inexperienced – at least, it is very clear she has never killed previously – would be given a task so important as a first assignment?

The logic to that, I found baffling, I’d like to see expansion upon that into a credible explanation there as to why The Bookmaker would call such a decision. Frankly, it makes me question his competence and judgement, and Nepotism only stretches so far.

With that said, the characters contained in the title feel individual, with distinct personalities. Jessa, for example, is not a brooding, stylistically “Dark Avenger Of The Night”, that can somehow defy gravity, stopping space & time, hovering in the air while our ‘camera’ shifts to capture her “good side”, no, as skilled as she may be, she’s also quite bumbling in mentality, and, well..quite optimistic, really.

As for The Bookmaker, despite the admission from Jessa about being fearful of him, with his stoic manner, extensive vocabulary and pseudo-intellectualism, irrespective of his demeanour, I don’t buy into the idea that he has the moral compass of a Terminator, and I don’t believe I’m really supposed to.

There’s too many nuances here, from Uncle Christian being allowed to refer to him by his first name at one point (William) – especially given the circumstances – to The Bookmaker’s handling of Jessa and Christian, not to mention my earlier query regarding his judgement. No, I get the feeling as this title continues, there’s going to be a lot more layers – and warmth to him than we are originally led to perceive.

Between Berghardt’s dialogue and Morgan Beem’s portrayal of him, we get the sense of ego and Narcissism in his sneer and in his eyes, that speak volumes about the kind of Snake we’re looking at here, something that also exudes from his Assistant, Mr. Mikkaelsen. Both are presented as formidable and competent antagonists for the series.

To a lesser extent, we get a feel for Jessa’s Cousin, Ri, and her Uncle Christian, Ri being like an Impish Golem, sporadically appearing from the ether to provide reminders for Jessa to stay sharp, she acts as a moral guide, and probably far smarter than she lets on.

Uncle Christian has an air to him, one of a Gentleman, but we’re still getting to know him. I sense an opportunist here, a chancer, and very possibly, quite the cad.

Criticisms aside, this is a warm book, with gentle humour, and despite it’s dystopian back-drop, it is such a pleasant departure from the normal macho grittiness we usually have thrown at us from similar offerings, serving itself to us less as a doom-laden, cynical dirge-fest, rather, it has more commonality with a Fairy Tale with more sass.

For those that like eloquently written stories that give as much focus to literary content as they do to artistic prose, even the lettering holds the tone and atmosphere perfectly, this book provides more bang for your buck in a market that has to work very hard to justify an almost $4 average price tag.

The Family Trade does so, but also follows a golden rule about value I learned a long while ago;

“Always give the client more than they expect”.

It does. A very admirable, in-depth start to a new series, well worth expending three hundred and ninety nine pennies for, me lovelies. Gawdbless ya.
My final rating: 8/10

Editor’s Note: Issue 2 is due out on November 15th!

Summary: On an island city in a world where history didn’t quite turn out like ours, a hidden family of spies, thieves, and assassins makes sure that the world keeps going. Or they did, until Jessa Wynn, their youngest member, manages to start a civil war.