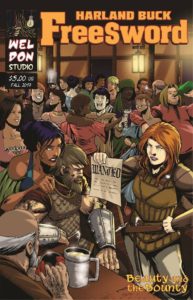 And we are back in the land of hard men, tougher women, frontier wilderness, myth, magic, and adventure with swords a swingin’! That’s right folks, Harland Buck has made his most glorious return to being right in front of our eyes! I like that this is essentially a stand alone issue, one that could even have potential for repercussions later on down the line where Serra’s concerned. That is, if Scott Weldon chooses to go there and hopefully he does! I’m glad to see Dino Agor and Fredrick Allison JR. still on board here in Beauty And The Bounty. As these two are a perfect combo for Scott and Dejon to have for Harland Buck. The fact more attention is given to Harland’s face where his scars is concerned is pretty nice too. Ya know, the beginning of this issue has me really feeling like I can relate to Harland when it comes to not liking loud places. And only dealing with them cause of a person or something I’m wanting to see being there. 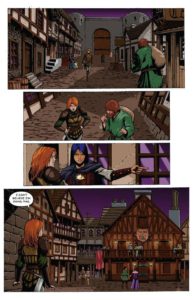 Case in point, Lilian Rose. Who, nicely enough, isn’t the standard white woman you’d probably see in an era like this. Making me like the world Scott’s created here even more for not being typical if that makes sense and willingly being diverse. Especially where women are concerned and that Harland’s not written as someone who turns a revenge seeking woman (Serra) away just cause she’s a girl. Yay for equality! It really seems like Harland and Lilian have quite the relationship (if you can call it that) if she’s able to talk to him in the way she does that ends up causing his conscience to act up. I wouldn’t mind seeing more scenes of these two together in the future if its possible as just from their few scenes together it really feels like there’s something there beyond the uhh, heh… ‘Sex Work’ aspect between these two.

I kinda wouldn’t mind seeing Lilian and Harland’s sister team up against him as that would probably be pretty amusing to see. Especially if he’s being hard headed about something! And no, Serra, ya silly girl, ol’ Buck’s no coward! Otherwise, he wouldn’t have been recommended to ya! The scene with a certain favorite Realmguard was (in my view) too short but it was none the less enjoyable. Folks who’ve read this will probably get where I’m going with that for more then just the time we saw him and Harland spend together in the first two issues. The question is though… Does Harland join the man and his family for dinner after the end of this little adventure? Only Scott knows the answer to that question! I’m curious though, is Harland teaching Serra where and who to ask for certain information without being too obvious about it? And that it won’t necessarily be easy to get it unless luck’s really on your side? 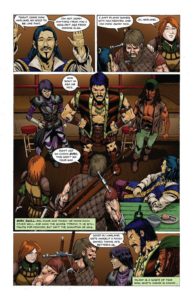 If that is the case, it just shows another aspect of how smart he actually is in addition to how observant he is and I love that. The smarts coming into play around the end, not to mention that pesky conscience he doesn’t like having crop up on him! I could go on and on about this issue but I’d be at risk for spoiling things for you guys who haven’t read this yet and I want to avoid that so I don’t ruin things. Or have Scott send Harland after me for doing it! The fight scenes, the new characters, and the story itself is all wonderfully done and I’m glad I got a copy of this great read. Until next time folks!

Summary: Harland Buck is asked to track down a bounty with a young woman, who is motivated more by revenge than money. In Harland’s own words, revenge is bad business… but will that dissuade Serra Cobbler from her path?