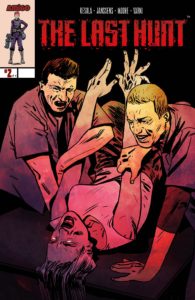 In these issues: The three Scientists, recovered by the crew of the Ragzon are taken on board the ship, they interact with the crew, who welcome them in.

As the ship’s crew allow the Scientists autonomy, gradually inviting them to tour the vessel, their real purpose for doing so is revealed; divide and conquer!

Each crew member starts to fall prey to its guests, as the remaining crew discover this, the hunt really begins!

Review: The Last Hunt is very nicely presented. As I noted in my review of the first issue, the feeling is very much that of late 70’s/early 80’s Sci-Fi Horror, with the rough lines and heavy blacks of Paul Moore’s art, coupled with Beth Varni’s vivid and moody colours, the feel of The Last Hunt in itself is largely spot on.

At places, the colour seems a little too rich, it’s better served by more musty colours, for example, rich greens and yellows could be exchanged for green-greys, Khaki and Mustard colours. These brighter colours we find instead make it a little too vivid, which distract, rather than add to the atmosphere. It doesn’t ultimately hurt the book, these are just suggested tweaks.

Paul Moore brings us pages that remind me of when I reviewed “Escape From New York” from BOOM! Studios, it’s got that ‘throwback’ feel a book like this needs, and although a little basic in places, less detailed, in itself, there’s nothing wrong with the art.

As nice as it can be to see more depth and detail in a page, if it detracts from the readers flow of the story, it’s disruptive to the work itself, you give the page what it needs.

So on the visual side of this title, bar minor preferences on colour adjustments and a little extra detail, it works well, the action elements feel natural and without restraint or defect, the lettering from Ken Janssens is sharp, the onomatopoeic qualities give the effect needed, the choices of fonts don’t feel inappropriate and the production quality is certainly professional. 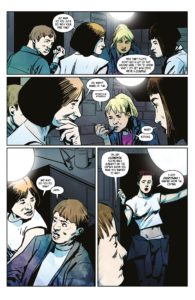 But then we need to look at the story. For whatever else we have going for a book, the story will be the key element to what brings a satisfying read.

To say that the basic plot is not an original one is not unfair, it’s your basic “Slash & Stalk” story, but finding anything truly original is rare and difficult to find, so what we really need to consider is the rendering of it.

We’ve seen plenty of stories with this theme in it that just drag themselves out in a horrible and droll manner, but there’s also plenty of examples of it done very well, John Carpenter became a master of it, with his films, “Halloween”, “Prince Of Darkness”, “The Thing” and “The Fog”, and of course, Ridley Scott’s “Alien”, the latter of which is closest in feel to The Last Hunt.

This is the second time this month I’ve brought up Carpenter, albeit, in a different capacity, but Carpenter’s works really do hold as a pinnacle for demonstrating variation on a theme, as each of them stand alone as classics, despite the central theme being the same.

What affects The Last Hunt is not this. In itself, the structure works well, the scene shifts provide a logical advancement of the story, and though the script is riddled with contrived and cliched dialogue, it’s “Movie Speak”. Movie speak are those tired lines you hear again and again; “thanks for the save!”, “we gotta get outta here! NOW!”

To be honest, though I notice these things, it doesn’t essentially bother me, I know the value of this type of dialogue, and however ‘cloned’ it may be, much as I prefer a more ‘personalised’ diatribe, there’s an essential quality with it that’s undeniable; “Movie Speak” is accessible.

Where a more intellectual approach is required, my preferred lexicon in a script generally won’t contain this type of talk, but general audiences have a preference for that level of accessibility, sometimes, you just want to be entertained without thinking too much.

You see, for whatever other qualities The Last Hunt has, for good or ill, it just moves too fast for its own good, it never holds on long enough for us to get any understanding of any character we have here, either Protagonist or Antagonist, and this is where the “Movie Speak” doesn’t lend itself well.

Ultimately, the only thing I’ve drawn from this set of characters has not grown since my last review; Steve is a Philanderer, the general conflict I’ve expected is, well, general, I suppose.

When a story moves so fast, when we have no real breathing room, we also have no room to appreciate anything we should be taking in. The basic premise of the story in itself is reasonably sound, but it lacks the substance we need for a fulfilling read. 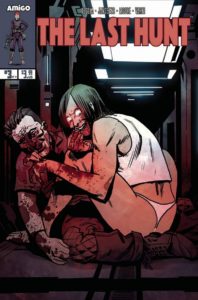 I prefer to review works as they are presented to me, so I have yet to enquire with Hannu as to whether there was a specific limitation of the amount of issues allowed by the Publisher, but in order to give this story what it really needs, I’d suggest at least 6 issues would be required, or at least better usage of content in a page, filling it out more, provided it isn’t also harmed visually.

Slow it down, I would say. Let us learn something that connects us to the characters, so it matters when someone dies, or is affected by death or the circumstances, let us have a sense of who we’re dealing with, because I’m finding less detail in these characters than a dating profile holds.

If time and space for telling the story is restricted, a better way of handling this might be to not juggle so many characters, to concentrate on only a maximum of 4, with possibly just 1 main Antagonist, this way, we don’t have to account for the circumstances of all parties concerned.

However good a story can be in its basic form, if it feels too clinical, if we don’t understand at least a central purpose for the characters, and why its essential they stay alive, we have no reason to care.

Case in point; an Engineer. If your spaceship breaks down, and the Engineer is dead, this is going to take a serious work around. Then again, the Captain probably also has good experience in most fields.

SO YOU KILL THEM FIRST! (Well, in a lot of circumstances)

In the end, for any other qualities it has, The Last Hunt is, I’m afraid, ultimately a “filler” read, a fairly enjoyable one, but perhaps better utilised as a read in between journeys. But a “cult classic”?

There’s one more issue to go before the conclusion of the story, but I can’t help feeling that in a world full of ‘re-makes’ and ‘re-envisionments’, The Last Hunt is one that could certainly benefit from an over-haul. An expanded version in trade form, with fleshed-out, strong characterisation, as a “Special Edition” or “Director’s Cut” might be welcomed, but in its current published version, its only feeling a little less vacuous than the space surrounding the ship, though it’s not enough to make you want to get into an airlock just yet either.

Scoring average per issue: 4/10
Over-all scoring for the series to date: 4/10

Editor’s Note: Stay tuned to the Amigo Comics Facebook page for all things The Last Hunt and more!

Summary: “A routine run to the dry wasteland known as EARTH goes bad when the cargo ship “RAGZON”, breaks down. But that’s nothing compared to what the crew will face after helping out a TRIO of scientists… beautiful women with a dark secret… and a taste for BLOOD!”