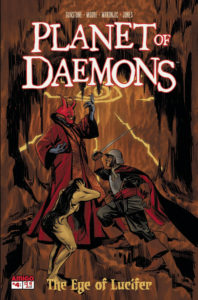 Kevin Gunstone has certainly given us an interesting read when it comes to Planet Of Daemons, and though I don’t think it was his intent, I found myself pretty much liking every other character who had some form of page time instead of the actual main character. As despite Amos Deathridge’s time in the occult realm of Qliphoth, (though how much time is uncertain) he is very much a man of his era and I can only imagine what sort of problems that may cause him later on if Kevin continues this world of his. I gotta say though, Kevin spins a pretty good tale here that keeps you guessing and wanting to know more as each issue happens. Especially where the new Succubus known as Heinous is concerned as you think you have an idea of who she might be but the reveal is one you aren’t expecting. But I gotta wonder if its one character we have a small exposure too as Deathridge ends up on Qliphoth that is reborn or if its really his significant other that gets reborn. Or is just somehow a combination of both? Even if said re-birth isn’t exactly one you’d expect, especially for a man from good ol’ 1649 in Ipswich, Massachusetts, New England.

Which, isn’t exactly a good time for women if you happen to think somewhat outside the box with your religious practices! Plus, the use of ‘gaoler’ in place of ‘jailer’ is an interesting one as I’d never heard of the term until reading this title and I wonder what made Kevin decide to use it. Issue 1 nicely sets things up while making one wonder what exactly happens to a soul if the owner of said soul ends up dying in the realm of Qliphoth. And considering I have something of a vivid imagination, Qliphoth basically being a Hell dimension gives me little comfort that good things are expected for those who get trapped there and end up dead. Issue 2 continues to guide us with more of Amos’ past that eventually brings him to the Qliphoth while learning of a gift his wife has. Along with a couple of nay sayers looking to cause trouble cause they don’t like how things are going.

Paul Moore’s art and Stefan Mrkonjic’s colors serve pretty well in this series and while the demons and the like in the Qliphoth aren’t too fantastical in their looks, they are about what you’d think they’d look like in a place like the Qliphoth. And I hope these two are around for the ride for future issues if Kevin goes on to issue 5 and beyond. Which I seriously hope he does as I’d like to see what happens in the aftermath of the dust settling. Issue 3 gives us more of Amos’ past while showing his current problems (and Heinous asking lots of questions, which is really great!) and making me wonder why some Angel would willingly give him something like Adam’s Jewel considering its power beyond countering sinister emanations. Especially considering where he’s at and the likely temptation the man could fall under at some point in the future! Issue 3 also introduces us to Silas The Blind (who kinda resembles a Goat man maybe?) and he’s one of those characters I mentioned earlier that I liked way more then Amos.

An action of his a short time later may not be entirely unexpected either. Hell, I probably would do the same considering past experiences and all! Issue 4 is when things finally come together for not only Amos but us readers too. How Amos gets said knowledge is interesting and again makes me wonder about his wife Trinity and the new Succubus he encounters in Qliphoth. Thanks for that Kevin! I am curious as to what’s been happening with his son while Amos has been busy dealing with demons and the like in his new home. Which we may get to see whne the time comes, that is, if Heinous doesn’t end up getting too angry with Amos for his control of her and kills him for it! Which that is one of those things I was talking about earlier about how he’s a man of his time and with something that would give him control of his wife? He damn well isn’t gonna let that pass up. Especially after recent events! Who knows, perhaps in the future I’ll come to like Amos but I kinda doubt it. So if I’m seen rooting for the bad guys or whatever, don’t be too surprised! Remember folks, issue 4 is out September 27th, get it or miss out and end up in Qliphoth!

Summary: In the labyrinth of Sathariel, Amos Deathridge faces the disturbing truth behind his arrival in the Qliphoth and the real identity of the Succubus Queen, Heinous. Shocking revelations that threaten to break his spirit before his showdown with Count Eligos, the daemon of war.