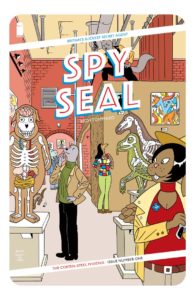 I love anthropomorphic tales and Spy Seal is no exception. It’s a hell of a lot of fun. Although I have to admit, a seal would not have been my first choice for a spy-type lead, as I doubt it would be for many. But perhaps, that’s one reason this new offering from Rich Tommaso is so immediately endearing. The world loves an underdog. Err, underseal?

Our hero is Malcolm, the British seal, who lives in a modern day world like ours only populated by animals. He’s the classic everyman/reluctant hero, an unemployed seal who falls into a world of spies and secrets. While visiting an art show with his friend Sylvia (a bird of some sort), a Russian “buxom

bunny” befriends Malcolm and drags him into this new world of espionage when two wolves performing a modern dance routine open fire on the crowd. Malcom springs into action without a second thought. After his friend is shot (“winged” as she puts it–British humor at its best!) Malcolm hauls ass after one of the escaping wolves and manages to hold his own in a hand-to-hand showdown on the rooftop. Malcolm is later visited by the Russian bunny in his apartment, who is subsequently shot and dies in front of him, thought not before slipping him the Mcguffin of this arc, the Corten-Steel Phoenix broach. After M-16 confront Malcolm and his recent involvements with the Russian, they become convinced Malcolm is a natural born spy and offer him a job.

What I find most compelling about Spy Seal is how writer Rich Tommaso makes such a straightforward story (although I’m sure major twists await–it is a spy book), and one that’s been done to death, so fresh. His dialogue is quick-witted and whimsical, full of that famous British dry wit. The pacing is excellent. Tommaso manages to cover a lot of territory in this action-packed yet explanatory opening issue. And while I’m sure there out there, though none come to mind at the moment, Spy Seal is completely dialogue-driven. The story unfolds directly from the actions and words of the characters, sucking one in to the story and characters without having to be pulled out by explanatory narrative that, quite often, isn’t necessary. (Don’t get me wrong though, I HEART me some caption boxes!)

Tommaso’s art is very simple but also very quirky. It’s a most fitting style for the tone of the book and I enjoyed it very much. The colors are crisp and clean as well, the pastels popping, giving off a very mod-ish 60s feel. (Which makes sense as I think Spy Seal takes place in 1965, according to the possible scribbly date on the newpaper on the opening page.) The art gallery scenes were exceptionally awesome as Tommaso populates it with visual images that we all hope would actually be at an art gallery though rarely ever are.

Summary: “THE CORTEN-STEEL PHOENIX,” Part One Journey into the thrilling world of international espionage as one of Britain’s most covert MI-6 divisions, The Nest, recruits a brand-new secret agent to their team: SPY SEAL!