Plague #1 is a pretty good opening chapter to this unfurlin 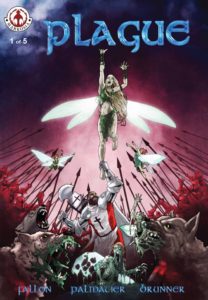 g fantasy epic set during the Black Plague of which the the book gets its title. So much so that it took me by surprise just how much story is jampacked into these opening pages. Seriously, a lot happens. And though it’s essentially given to you in digest form in the official synopsis, overall the first issue sets up a lot of interesting things to come.

The overlying theme of this entire issue is the death of the old guard and the uprising of the new in some fashion. The old Fey king dies leaving his young son in charge of the Fey kingdom. The young Fairy Danann loses her entire family and friends to soldiers of God’s court. The leader of those soldiers loses his entire family to a magical creature of some sort in a well-placed flashback. And our young Friar, Robb, loses his entire abbey leaving him in charge of the sanctuary.

Whether this was intentional or not using the plague as the cause of most of the deaths seen in this book is a good backdrop for taking out the old and bringing in the new. However going back to what I said that there’s a lot that happens in this book there were times I was wondering whether or not there was too much. Given that the first half of the story focuses more heavily on Twylyth before sidestepping hard over to Danann and then making another hard sidestep over to Moray, it was difficult for me to keep a grasp on what or who this story was really about. If Robb is the hero then this book is doing a really good job at keeping that fact hidden.

Those complains are not to say this book is bad, like I said up top it’s actually a pretty good opening issue all things considered. By the end of the issue all of our characters have crossed paths one way or another and have nearly all synced back up by the end so that all their narratives will cross much sooner rather than later.

Speaking about the characters themselves for a minute, as I haven’t actually done that yet, I found everyone here to be interesting in their own right. Twylyth is headstrong and perhaps a bit too cocky but I’m interested to see where he goes from here as a character. Robb is as poetic as I would think a Friar lost in his faith in the wake of so much death to be. I’m interested to see what’s done with him and how his relationship with Danann progresses. If it will be purely platonic or romantic. Danann then is my favorite character of the issue as she sees humans in a very naïve and innocent way that comes back to haunt her entire clan and also ends up getting them killed. How this effects her psyche towards humans we’ve already seen a little bit of and it’s going to be a fascinating journey for her I’m sure.

Moray is the only other main character I’m not too sure about yet. Simply because the death of his family at the hands of what looks like a troll doesn’t correlate in my head as a hate for all Fairies unless in these last 44 years since the incident has taught him that all magical folk are purely evil, which would make sense. It’s simply that the transition for his character in the story between flashback to present day doesn’t stick the landing entirely for me.

The art for this book is really good. I enjoy it quite a bit. The plague victims look quite gruesome where as the unaffected characters all look good in their own right. I was thrown off however as to how the Fairies are drawn for most of the issue it does look like they’re much smaller than humans until Moray’s group finds them and then suddenly they’re lifesize again. I must have missed some sort of spell altering their size at some point or something. 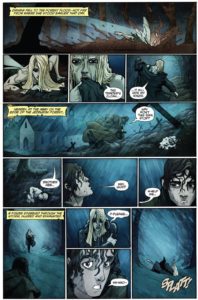 I truly enjoyed this first issue overall. I like the concept of these human factions going up against the last remaining remnants of magical creatures as the Black Plague devastates both sides. And the cover for the next issue looks really, really cool. I give this book two thumbs up. You should definitely go check it out if you’re craving something mystical right now.
Final Score: 3.5 Black Plague Victims out of 5

Editor’s Note: Interested in checking this out for yourself? You can head over to ComiXology or the Markosia website!

Summary: When the King of the Fey dies from the Black Plague, his angry young heir, Twylyth Tegg, vows to save his people by any means necessary. That same night, we meet our hero, Robb Aubert, a fearful friar of the Jedburgh Forest who has lost his faith and fellow friars to the dreaded plague. Driven by a mysterious note from the German Bishop of Hildesheim, Friar Robb is about to catch the last boat leaving the English Isles for the mainland when he crosses paths with an injured English Fairy – Danann Atreyu – a fey girl who has just lost her family to the infamous Black Cross, the Warbishop Jean De Moray. But Moray is more than just a bloodthirsty tyrant, he’s a man haunted by the long-ago death of this baby brother and at war with himself over all he’s done in the name of God since. His dreaded Dyrewolves track Danann’s blood-trail to the gates of the abbey where Friar Robb has unwittingly taken her in. It seems Robb is harboring a magical creature – a crime punishable by death.