f reading some Battlecats. So when I was sent more to read, I was pretty darned happy about it! Though its clear a re-structure was in order as the original issue 1 is now issue 2 as issue 1 is now all about the origin of the world of the Battlecats and how things came to be. Which is some really cool stuff to know! Especially that there are dog folk around too! Seeing a young Kelthan learning the history was pretty neat as well in the new issue 1 origin. Both the Lion God and Eramad the 1st are some rather bad ass looking Cats too! Ones I wouldn’t want to mess with either for that matter! The Lion God being the one responsible for Catlife and Eramad the 1st being the one responsible for helping unite everyone instead of b

eing separate. Learning what each of the Moons are and what they represent was neat as well. Along with a brief look at each country of the world of the Catkind looks like was pretty great as well as they all look rather beautiful. 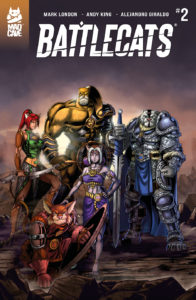 to mention places I wouldn’t mind going too! Fanghelm especially as that place looks damned beautiful! I gotta wonder though, just how old Natharien is as he’s been around long enough to witness three different Eramad reigns. I know dogs more or less have longer lifespans or whatever in human years or whatever so he’s gotta be damned old! Unless he’s an immortal or some such. Unfortunately, while Eramad the 1st was a pretty great Cat, Eramad the 2nd wasn’t as much. But at least he had the grace to do what he did after things calmed down a bit. Eramad the 3rd however, seems to be more of a respectable Cat to be a fan of. Even if there is a hint of something he may have been involved with when it comes to the Dire Beast the current group of Battlecats we were originally introduced too are after. And man… We’ve only gotten a small taste of what the Battlecats have done over the years in various incarnations and I for one would love to see some kind of Chronicles or some such related to the Battlecats of the past. As I’d think it’d be fairly neat to see them in action! 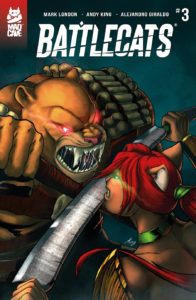 (Hint hint Mark!) There isn’t really much to say about the next two issues as those are the same, aside from the issue numbering anyway. Though Mekkar should perhaps listen to Zorien in the future when it comes to things that might be underground. No matter if its the desert or not! Issue 4 brings us the return of the Cat you don’t wanna mess with in a dark alley known as Eltoreq! And it seems he’s serving a Cat with some very bad intentions for not only Vaela of the Battlecats but also Eramad the 3rd himself! Whatever use he needs for Vaela concerning her powers can’t be a good thing at all either for that matter and hopefully she continues to be evasive! And like I mentioned earlier, there seems to be quite the secret where the Dire Beast is concerned. One Eramad doesn’t want getting out! And I have to say, that only really makes me darned curious about that secret. Especially since that beast himself is a damned formidable opponent for the Battlecats! And Mekkar? You might wanna come up with a better plan there buddy! 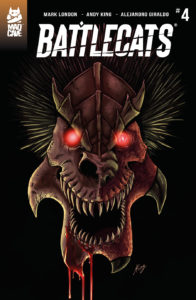 Especially before something like that gets you killed! I don’t know what’s going to happen next in this amazing universe of Mark London’s, (who has a damn great team along for the ride in helping bring his creation to life for that matter) but I am ready for it! Will our fair Battlecats discover the secret of the Dire Beast or will they simply slay and win the day!? Like the Shadow, only Mark knows until he decides to allow us to see the next amazing issue!

Summary: A formidable enemy is introduced in the depths of the Blood Canyons, setting the stage for Valderia’s greatest crisis. In La Marque, the Battlecats finally encounter the Dire Beast. In Stormholt, King Eramad III is recovering from his wounds, while planning his next move. 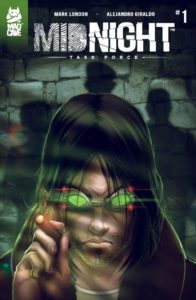 Summary: In the year 2055, Detroit is a lost cause, crime and corruption run rampant. A recent series of grisly murders has left the city in a panic. Now, the most gifted detective on the force, Aiden McCormick, is searching for a killer without any leads. To make matters worse, Aiden has a dark secret, he carries the weight of his past with him constantly. Follow Aiden on his search for a violent serial killer while he battles his own mental illness.

Mad Cave Studios and Mark London are back at it again with this latest title of theirs! One that’s got two (as far as I know) issues out and making me want more! Especially where back history’s concerned regarding our lead man known as Aiden McCormick. Who seems to have something of a slightly troubled past as hinted at in the first issue. Though why one girl seems against getting freaky with him because of one of his arms is something I’m rather curious about. And how he ended up getting that arm was not a pleasant way to get it either for that matter! We quickly also learn that things aren’t well in the city of Detroit, as there’s a rather violent killer out there who may or may not be looking to get into it with Aiden for that matter. Though with one of his victims I find myself wondering about, is the reason her shirt got back on her. As somehow… I really don’t think anyone would be concerned about their shirt being back on them when in fear of their life!

Granted, this could have been an over sight on both Mark London and Alejandro Giraldo’s part for all I know. But its not something that should take you out of the story unless you’re a real stickler for continuity in your panel to panel scenes in comics. Alejandro’s got some really fantastic art here for these two issues (I assume he also pulls double duty as the colorist too) as well. Its also real easy to see it was all done digitally rather then by hand. Not that I have a problem with it as I mentioned. As Hell, it would fit right in with an animated film on the Pixar level for that matter in my view! And like with Battlecats, Midnight Task Force isn’t for kids due to some rather graphic violence and also the near nudity seen here in these two issues on several occasions. Not to mention Aiden giving a support group the double finger for his own amusement (issue 2 moment!). Mad props to Aiden however for quickly figuring out a kidnapping case however! Although, I’m not quite sure I would have done it in the manner he did however. 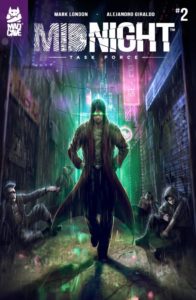 And is the Mayor a diabetic? If so, that’s honestly kind of neat considering the fact diabetics aren’t often seen in comics. Unless he’s just got another issue of some kind that requires a needle. As I’d hope he’s not foolish enough to do drugs right in front of two cops! One of the things I find interesting about this title is that Aiden is apparently not that alone in his mind. Whether that’s just all in his head cause of past problems or an actual thing remains to be seen. Especially three special colored items are concerned that he has. Colored items that also seem to reflect who’s talking in his head and providing running commentary that can either be helpful or not so helpful if one’s in disapproval of something Aiden’s doing or has done. Though its made apparent in issue 2 that these specially colored items are the only remains of a group of his from years past. Which is either really sentimental of him or just creepy. You can be the judge of that! Now while issue 1 was mostly a set up and all that good fun, issue 2 is when things get going a bit more so.

Along with seeing a guy named Luther who doesn’t seem to be much of a fan of Aiden’s! Which makes me wonder if the guy had a bad experience with our main man once upon a time and its colored his views of Aiden ever since. Who knows, perhaps we’ll learn more about that as the series goes on if Mark feels its something that needs to be a thing. And I’ll say one thing for Alicia, she certainly is a take charge kinda girl! Which makes me wonder how that would go with Aiden considering he can be kind of… Assholey like with her. I am loving the fact we actually get some actual investigation type stuff going here. Kinda CSI like too for that matter! Even if a little bit of it is creepy for that matter considering where a bit of evidence is found! Which naturally leads him to a potential suspect sometime later. An action that he definitely should have brought back up on considering what the potential suspect does where our main man is concerned! Maybe next time you’ll listen to your old buddy there, Aiden! Hopefully he’ll learn a lesson from this particular experience but we’ll see how that goes in the future.

He just better hope nobody tries anything on him while he’s out in that alley. Which would be damned creepy and worrisome if anyone did! Questions upon questions abound in this sweet little Mad Cave title and I can’t wait to see them answered. Especially where this whole Apprentice chick is concerned that Aiden doesn’t want to call in! Relationship that went wrong or what? Okay, I know that’s not the thing I should be focusing on here but I can’t help it! Now one of my issues with the second issue, is the fact that the club bouncers we see at one point all look the same. And I don’t mean in outfits as that makes sense cause you know, they work there. But body and face wise. As they all just look too alike in my view. Which makes me wonder if this was done intentionally or another over sight that wasn’t noticed. But aside from that and the shirt thing with the girl, I’ve definitely enjoyed what I’ve read here. So bring on the next bit of awesome Mark! I know I’ll be over here waiting as patiently (more like impatiently) as I can!