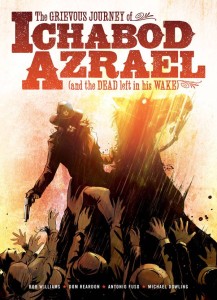 His name is Ichabod and he is a killer. But his death, for die he must, is only the beginning of his story…

Cowboys, demons, and a quest to escape the afterlife – 2000 AD’s December trans-Atlantic graphic novel release is ‘The Good, the Bad and the Ugly in Purgatory’, THE GRIEVOUS JOURNEY OF ICHABOD AZRAEL (AND THE DEAD LEFT IN HIS WAKE).

Successfully published as a six-issue US-format mini-series earlier this year, the paperback collection will be published simultaneously in the UK and North America on 4th December 2015, as 2000 AD continues its commitment to bring the very best of the Galaxy’s Greatest Comic to both markets.

A bloody, romantic, supernatural meta-Western filtered through the language of Daniel Woodrell and the cinematic imagery of Terrence Malick – Ichabod Azrael is a tour de force from one of 2000 AD’s best writers.

Rob Williams (Judge Dredd, Unfollow) nails the narrative voice of a thousand Spaghetti Westerns as he plunges the meanest, nastiest killer of The Old West into the underworld.

With atmospheric black and white art from Dom Reardon (James Bond), Michael Dowling (Unfollow), and Antonio Fuso (The Girl Who Played With Fire), plus spot colours by Peter Doherty (Shaolin Cowboy) and letters by Annie Parkhouse (Judge Dredd), the series caused a sensation amongst fans when it debuted in 2010.

After being murdered by the dread hand of forces he does not understand, Ichabod vows to kill his way out of the afterlife and return to the living lands of colour. No one’s ever done it before. But no one’s ever been as mean a killer as Ichabod before. After not only finding the forces of Heaven, Hell, and nature itself ranged against but also some unlikely allies, Ichabod continues his single-minded quest to return to the world of the living – but is he chasing a dream?

Rob Williams broke into comics with his darkly cynical superhero series Cla$$war for Com.X before going on to work for Marvel on The Iron Age and Ghost Rider, and The Royals: Masters of War for Vertigo. He created the 2000 AD undercover Judges series Low Life and the wildly popular character Dirty Frank as well as the groundbreaking Judge Dredd: Trifecta crossover with Simon Spurrier and Al Ewing. His new Vertigo series Unfollow has just been optioned for a TV show with ABC.

Dom Reardon is a fan favourite artist at 2000 AD for his work on Caballistics Inc. He also drew the adaptation of Anthony Horowitz’s Raven’s Gate novel and is a cover artist on Dynamite’s James Bond series.

Michael Dowling is a breakthrough talent who made a name for himself drawing Death Sentence from Titan Comics and Judge Anderson for the Judge Dredd Megazine. His new Vertigo series Unfollow has just been optioned for a TV show with ABC.

Peter Doherty is best known for his work on Judge Dredd, Seaguy for DC, and colouring Geoff Darrow’s Shaolin Cowboy.

Annie Parkhouse has been one of the UK’s leading comic book letterers for more than 30 years. An Eagle Award-winner, she worked on Marvelman and is the lead letterer on Judge Dredd.