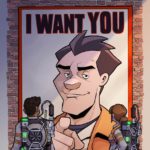 The 2016 Ghostbusters Meet Their Predecessors In New Comic Series San Diego, CA (December 21, 2016) – After making their cinematic debut this summer, the latest iteration of Ghostbusters will now answer a new call in 2017, appearing for the first time alongside the original Ghostbusters in — Ghostbusters 101: a new comic book series […]