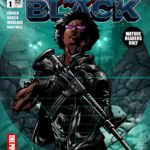 Victoria Black -The world’s most dangerous assassin must protect her family from the organization she works for. SECOND SIGHT STUDIOS brings a gritty, ultra violent and over the top comic series to Kickstarter! In the seedy underworld of espionage, there is one organization that is feared among all others. The United Assassin Guild, (UAG […]

Amigo Comics Solicitations: The bells toll for the Roman Ritual November 2015 Just one book this month? Well, it’s one hell of a book! And we mean Hell. It’s Roman Ritual, by El Torres and Jaime Martínez. An acclaimed but almost impossible to find miniseries, now compiled and with extra pages of sketches and illustrations. A […]