Celebrating diversity and marginalized voices, the continuation of the Ennead is now live on Kickstarter! 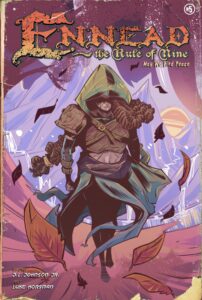 SEPT. 7, 2021, (SEATTLE, WA) — Visionary world-builder and author J.L. Johnson Jr. invites readers to Kickstart a whole new realm of fantasy, with two new installments of Ennead: The Rule of Nine, now live on Kickstarter. With art and letters by Luke Horsman (Judge Dredd), art by Apple Nunez (Heart That Wanders), and covers by children’s illustrator Martin Nihlen (A Hunt Such as This), storyboard and concept artist, Edward Lilley (High Value Target), rounds out this fantastic line-up!

An epic fantasy re-envisioned for a modern and diverse audience, Ennead: The Rule of Nine unveils the world of Amashik. Inahtuu Kinisc is running from his past, and his present pursuers, through The Republic Kingdom of Athea. Navigate a tumultuous transfer of power with Queen Ellaria Shadoon as she works to solidify her grandmother’s legacy… as well as The Rule of Nine. March with King Ulius Kazar as he fights to end a decades long war and ensure his name is remembered long after he’s gone. Witness as Ngia’wi of The Order of The Jade Crest races to prevent an ancient, and ethereal, cold war from turning hot.

Not Too Far From Home Page 10, Panel 2. Art and letters by Luke Horsman.

“Ennead is an epic spaghetti western baked into fantasy; it values diversity, representation, and marginalized voices just as much as it respects what’s expected from the genre itself,” said J.L. Johnson Jr “As a lifelong fan of fantasy, I got tired of saying ‘wow, I wish I could see “X” as a comic or graphic novel,’ so I decided to write one instead. I envision these stories as huge graphic novels and nothing else. As a set of books fantasy and comic fans alike could be proud to add to their bookshelves for years to come.”

“The story is full of dark and complex characters and the world of Amashik is a stark and enjoyable setting to work within,” said Luke Horsman. “All of the creative collaborators working on this title so far have been bringing this world together beautifully. This story is a joy to experience as the tale unfolds with every page.” 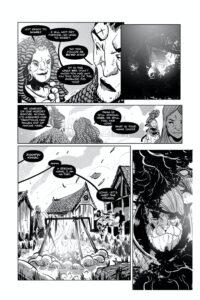 May We Find Peace, Page 2. Art by Luke Horsman.

“I’m eternally grateful that J.L. trusted me with his vision, and allowed me a level of creative freedom that helped us bring the story to life in a way that felt natural AND experimental,” said Apple Nunez. “It’s very clear, even at first glance, that there’s a lot of passion behind the world-building of Ennead. Because of this, I wanted to approach the story with a lot of detail and care, and I wanted each character to have their own recognizable design. These characters have lived for a LONG time, and we needed to believe that. They have personalities, favorite hairstyles, roles, and clothing that’s distinct and practical. No background characters here!” 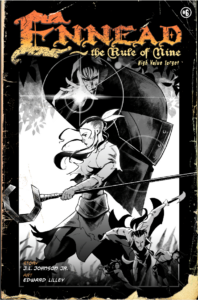 “After working with J.L. for the last few months, I was able to identify where my strengths are,” said Edward Lilley. “And the fact I get to hone my craft while working with a great story and characters to match is a true gift. Ennead has given me an opportunity to see what I’m truly capable of.”

For fans of The Stormlight Archive to Birthright, and as a work of heart, Ennead: The Rule of Nine, is solely meant for pages and panels. J.L. Johnson Jr. will be in attendance at New York Comic Con (Oct. 7 -10). For more information, visit enneadcomic.com.