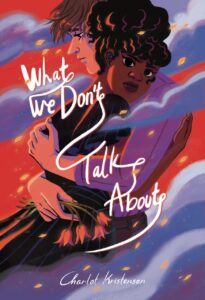 When I learned of this GN recently by the burgeoning talent known as Charlot Kristensen, I knew it was going to be an intense read considering the story’s themes and I was right on the money about that. Its not (of course I may just not be paying enough attention) often you see comics or media in general really tackle the more deeper issues when it comes to interracial relationships and the potential for one or more family members being racist against a Person of Color. Farai, our leading POC College gal, is a gal in love with fellow College student, Adam, whom she has been with for 2 years now and is finally going to be getting to meet his parents. A happy if nerve racking occasion, right? Or so at least I’ve heard as I’ve never done that sort of thing myself. Now with how Adam is acting should probably be a sign but can easily be passed off as just being nervous in the long run.

But as we soon see, our wee Piano player has every reason to be nervous and just in these first few panels of the meet and greet that things just aren’t going to be… Great.

The attitude and actions of Adam’s mom is enough to make you frown in disappointment and the dad’s no better either. Though whether or not he’s just been brow beaten into submission by his wife and just agrees to keep things flowing smoothly is a strong possibility as its clear she’s the one wearing the pants in this family. I mean, we’re more or less treated to how it seems this way with Adam given how quiet and even how defensive he is of his mom as we go along in this story. Now, Farai, this sweet and amazing girl is willing to give things the benefit of the doubt but I think she would have benefitted a lot from Adam being up front with her about his parents instead of having to find out things the hard way. 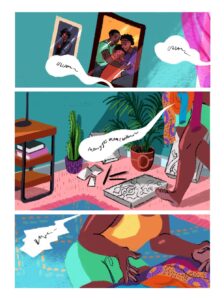 Granted, that probably would’ve possibly seen to an earlier end of the relationship or at least putting off the meet and greet a while longer. The first one quite likely being the one to happen more than the second one. Adam’s parents (his mom mainly) are very clearly ignorant because of location or because of a lack of education and its saddening.

As the parents would clearly benefit from having their minds be open more, more so Adam himself would benefit from actually standing up to his parents instead of essentially going with the flow. Later leading to Farai making a huge decision in the end that ultimately? Is the right one, even if it does hurt her and Adam. But you can’t be with someone who won’t defend you or even stand up for themselves where their parents are concerned. Charlot Kristensen wrote an amazing yet heart breaking story and I imagine a number of folks who’ve had bad experiences with interracial relationships will identify with this story a great deal. 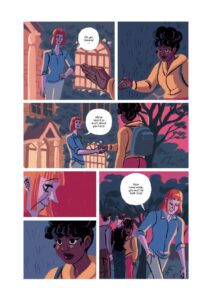 And personally, I’m looking forward to reading more of Charlot’s work when ever the chance presents it self! Work that is dedicated/devoted to Representation and the empowerment of Women of Color.

Editor’s Note: Wanting to check out What We Don’t Talk About for yourself? Head here! And be sure to follow Charlot on Twitter to stay up to date on her projects!

Summary: Adam and Farai have been together for two years, and Farai has finally persuaded Adam to introduce her to his parents. She’s optimistic, even if her mum isn’t! ‘I already told you, he’s different’ … Farai’s hopes are shattered when the first meeting turns out to be a tense, horrible experience, leaving her feeling uneasy and ostracised. When confronted about his parents’ behaviour, Adam plays down the situation – telling Farai to calm down and stop being so emotional – and Farai questions the entire relationship and whether Adam is worth the pain he and his family have caused. Ultimately, she takes a stand… will the relationship survive?