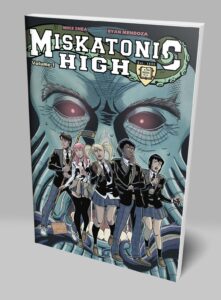 When I reviewed the first two issues of Miskatonic High way back in January 2019, I had no idea the true scope of what I was in for with this idea of Mike Shea’s. Those first two issues were merely a preview in the grand scheme of things and after reading the first volume in its entirety tonight, I am reeling from it all. I doubt even if I had a better understanding of all things HP Lovecraft, that I’d be able to successfully wrap my head around everything. And I don’t believe that’s a bad thing either as it just shows the potential for having a reader go back to page one for another go at reading everything. Like for example, Mrs. Abrahamson, I never caught on to the potential importance and reference of that name in my reading of the first two issues. Now, granted, its entirely possible I’m reading into things that aren’t there but hey, one never knows! Beyond the first two issues, we get to learn more about our group of (six!) five kids and they’re all (aside from Sarah) assholes more or less.

Each of them are also fairly special in various ways as (aside from Matt so far) well in some form or another as various events happen that brings those ways to the fore front. Matt as far as I can see, is the most normal of the bunch with some engineering, Hockey, and safe cracking skills? Okay, maybe not exactly a hundred percent normal! A lot happens to these kids from beginning to (for now) end and its a lot to take in for not only them, but readers too! Or at least for me anyway and if you aren’t careful, you might get a bit lost in all the action and mystery! Though even when you get one question answered, another 3 to 4 questions make their way to the fore front as the story goes on. But one particular question that has yet to be answered relates to Mr. Walid and whatever is going on with the man. Perhaps something that’ll get answered in future issues? One can only hope!

Now something is still clearly up with Alex that has yet to be explained where her early fate is concerned. Unless I’m somehow missing something and hopefully that as well gets touched on in the issues of volume 2. Same for what truly puts Simon on the path he evidently goes down. Is it just Destiny that he can’t escape or is there potentially more to it? Only Mike Shea and Ryan Mendoza know the answer to that! Along with other answers to questions us readers have! Though one question remains… One that’s bigger than whether or not Destiny and the (The Past?) the Future can be averted/changed. Is it better to deal with Lovecraftian horrors or all things High School?

Editor’s Note: Head here to grab yourself a copy of Miskatonic High! And if you enjoyed this review, please let us know in the comments below! And perhaps even make a small donation to our Ko-Fi page!

Summary: In the rustic hills of the small New England town of Miskatonic lies the prestigious Miskatonic High School. When the Community Service Club goes on a field trip, they’ll be launched on a terrifying adventure that will change their lives and birth an evil into our modern century.