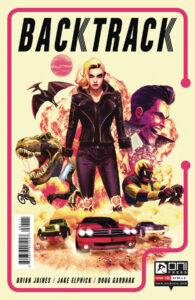 Automobiles have been a Human fascination since the existence of the very first Prehistoric Wheel. We love cars, and that is an undisputed fact. Now you don’t have to be a “Gear Head” to fully appreciate them, it could be a simple name, color, or look that peeks your individual intrigue. Men and women alike have important interests in cars and other vehicles, whether it’s for a matter of convenience or just because you love the technology. So because of these truths, it’s normal to see automobiles infused into other parts of our lives, such as movies and comic books. But the challenge is trying to find something new and fresh out of something that is so old and classic.

The comic known as Backtrack has not only solved this dilemma, it has provided us with an answer that will be hard to surpass. Ford vs Ferrari is a 2019 film that is up for some major awards, and we all love to see a thrilling chase scene in any action movie. The first issue of this brand new comic book series has seemingly combined the successful Fast and the Furious franchise with the incredible Jurassic Park film legacy. This story features a character named Alyson Levy, a former famous “wheelman” known for evading some of the biggest police highway chases, while managing to get away with all the “gold.” Unfortunately, she has now turned into a retired down and out on her luck penniless drunk. Her average nights were filled with self-pity, loneliness, broken liquor bottles, and vomit.

This was until her usual activities crossed paths with a strange man called Casper Quellex. Via the power of “Tabula Rasa”, Casper makes an offer to Alyson so enticing that she had no choice but to see how much this crazy person might actually be able to help. A simple race to earn a “Reboot” on my life? What looks to be the easiest job on the surface, turns into a race to survive and stay alive. The first issue of Backtrack sets you up to understand that nothing is impossible, and the stakes will get higher at the start of each new lap in this epic race through time and multiple dimensions. The good news is that she’s not alone, so we ask the question; will she make friends, allies, or powerful enemies?

I am really looking forward to the next issue of Backtrack coming in March of 2020. This first book leaves you with a mouth-watering cliffhanger that will make you pull your hair out in anticipation to know what’s going to happen next. There is so much involved, and much more to come. Questions were raised in this first issue, and we need to find those answers as soon as possible. Don’t be surprised if you find this series on Netflix in the near future. A great read, with beautiful artwork and character dialogue.

Editor’s Note: Backtrack #1 will hit comic shop shelves on February 5th, folks! So be sure to grab yourself a copy! And if you prefer digital, you can pre-order over here on ComiXology!

Summary: Guilt weighs heavy on former criminal “wheelman,” Alyson, who led an illicit life that left her shattered into pieces. But when she hears about a massive cross-history car race that grants the winner a chance to correct a single mistake in their life, Alyson will drive from the Big Bang to the death knell of the universe for the grand prize.