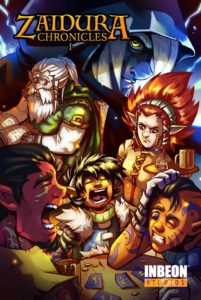 As someone who recently started getting into WoW, I felt a real connection with this book as the whole thing felt as if it I could take place within the world of Azeroth. It doesn’t, but it’s very much that high fantasy swords and sorcery style which is nothing original, but it’s a genre I flock to every single time because I love it so much.

Zaidura Chronicles I does a lot of setup, and while it can feel like not much has happened by midway through the book when the action finally ramps up, that feeling is just masking for the fact that a lot has actually happened only at a slower pace. CJ Martin allows us to breathe and interact with the characters, really feel for them and resonate with them in their everyday lives.

The tavern in which Sarah and Erebos work is setup seamlessly to feel like it’s been lived in for years, and there’s a whole social outpouring that centers around it. Characters interact with one another in the ways you only would if you’ve known someone for years. And it never gets dense enough that you can’t interact along with them. The atmosphere is inviting and warm, as it should be, letting you become part of this new world you’re investing your time in.

By the time that action began it felt earned, never rushed, and was all the more exciting because of that.

I would say my only real “gripe” with the writing, and truly it’s just a nitpick, is that possibly a bit more nuance could have been handled in some of the dialogue. There is a lot of “I’ve seen this before, I’ve heard this before” kind of dialogue being thrown around so maybe elevating some of it a bit would have been nice. Ultimately though, the finished product is great full stop.

The art too by Skooba is very round, and bulky. With the fun scenes being incredibly so, feeding into that childlike glee of old friends roughhousing, and the actions scenes feeling very fluid and straightforward. There were only a few times I couldn’t quite tell what was happening at first but that’s mostly due to the heavy inking. The bulk story is in black and white so those important negative spaces can get lost at times in the action panels.

While there wasn’t a lot for me to feel like this is a wholly original work in concept, the execution was still a lot of fun and forward, and really played to that fantasy itch that seemed to have on a near daily basis. The characters are loud and witty, compassionate, and intriguing. The villains are mysterious, but recognizable in their broader characteristics. Zaidura Chronicles is wholesome and fun, something for all ages, and well worth your time of day. I had a blast reading it and I hope you do as well. 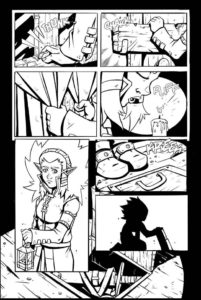 Summary: A small village is invaded when a mysterious organization known as the Veil come in search of a mysterious young child. The child is Erebos, who’s completely oblivious to the trouble his very existence will cause. And looking after him are Sarah and Benton, a father/daughter duo of tavern owners with some connection to the Veil. Set in a fantasy world, only peril and adventure await those who dare to cross the Veil and come out the other end alive. This is the Zaidura Chronicles.