A character-driven, high-octane, noir tale of manipulation, loyalty and revenge…. Hardly a word spoken in 30 Pages. 233 panels. And 32 Kills… 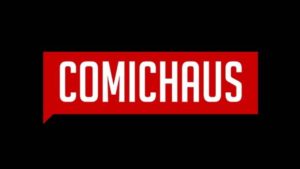 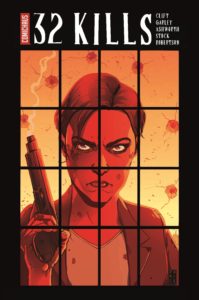 Launching at the Thought Bubble comic art festival, and MCM Scotland on the 22nd September. The perfect-bound 40-page comic has a cover price of £5. 32 Kil ls is available to pre-order from Comichaus.com – £5 plus shipping. — About the publisher: COMICHAUS is a comic book marketplace and streaming app where you can discover indie comics. They also publish an anthology featuring the best and brightest indie creators. ‘32 Kills’ marks their first foray into the graphic novel publishing world. “Once we had seen a few of the initial finished pages we were hooked, and knew it was something we wanted to be involved in” (Pete Genepool – Editor).

Reviews (more to come). “Action-packed from start to end, 32 Kills provides a thrilling experience in a way that only a comic book can.” – Tayo (Los Harrow) –

“A high octane mix of the relentless action of The Raid, the hard boiled grit of Ed Brubaker and the artistic flair of Darwyn Cooke.” – Alex Thomas (Pipedream Comics)

Andy W. Clift // co-creator and artist. Andy is a writer, illustrator and animator who has been working within the artistic industry for many years. His comic credits include The Activity, The Pride, Samurai Slasher, and The Punisher, as well as creator-owned projects such as Bertie Bear and the Dagger of A Thousand Souls, Red Rocket Comet, SGT Steel Allied Avenger, and The Adventures of Captain Cosmic. Andy also works as a Technical Tutor specialising in animation at The University for the Creative Arts in Canterbury. AWClift.co.uk – @andyWclift – facebook.com/awclift

Mike Garley // co-creator and writer. Mike Garley is an EMMY-nominated writer who has written for Adventure Time, Wallace and Gromit, and Image Comics’ 24 Panels anthology, as well as creatorowned projects The Kill Screen, Samurai Slasher, and Our Final Halloween. When he’s not writing, Mike lectures on Creative Writing for Brockenhurst College, and Scriptwriting for Film and TV for the Arts University College Bournemouth. He’s also more fun than this bio implies. But not by a lot… Mikegarley.com – @mikegarley – patreon.com/mikegarley

Mike Stock // letterer Mike is a comic book letterer and graphic designer, he was also the digital editor for the Dead Roots anthology and VS Comics. His lettering credits include: 32 Kills, Clockwork Watch, Dead Roots, Destiny’s Fate, Eponymous, The Kill Screen, The Pride, Raygun Roads, VS Comics, and several short stories for Starburst Magazine and Image. michaelstock.co.uk – @sheriffstocky – facebook.com/comicbooklettering

Darick Robertson // cover-artist Darick Robertson is an American comic book artist, writer and creator with a decades long career in the industry. His notable works include co-creating the award winning Transmetropolitan, The Boys and Happy! He has illustrated for both Marvel and DC Comics on characters including Batman